My mother was Virgo (Sun in 12th), with Cap Moon opposite Pluto.

Like Opalina says, I think she would've been much happier not being mother! (I know what you mean Opalina!) Both my brother and I weren't expected, which didn't help. She was not into motherhood at all.

Her mother was strict and my mother was rebellious so they really didn't get along together.

She was an unhappy person, and it was difficult to communicate with her. I was very uncomfortable around her, avoided her as much as I could.

But she didn't have a basically mean character. She could have kind intentions towards other people. I think she was very shy, but could really be hard to put up with when she blew up (Uranus opp Sun and Mercury). She was smart and had good taste. I think she was just very ill at ease in the world.

When I hear or read about wonderful mother-daughter relationships I think it's wierd, but I know it can exist.

@satsun Yes it can. My daughter and I are extremely close. We are more like best friends. 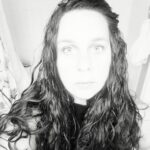 My mom has an unknown birth time and she was born on 1/20 so she is on the cusp. I am leaning more towards capricorn as thats my moon.  When I was reading the post, the first thing that popped in my head was when i broke my arm in half. I remember her laughing the entire way to the hospital. Anytime my dad hit a pothole she laughed. How she copes I guess. Neither of my parents were nurturing. They showed their love by buying me things. I guess its their love language. I married a cancer, who is very affectionate and Im not.  I wasnt used to it and it caused problems in our relationship.  I didnt like being touched and telling me he loved me whenever we got off the phone, was annoying. WAS not anymore. I feel like a dog he recused from the shelter. He has saved me many time reeling me back in from the edge. He mothers me. His sun conjuncts my north node exactly.   Even though it is foreign to me I try to be more like him. I push through

My Mom was a Cancer Sun and late Scorp or Sag Moon. I'm leaning towards Sag for her.  I'm a Capricorn Sun with a Sag Moon/Asc. She wasn't a touchy feely mom but we had a strong bond.She called me her right hand. I worked with her in our diner. We also bonded intellectually. Reading and talking about all sorts of things. Life, philosphy, psychology, astrology, past lives. My brothers and their  friends used to walk through our kitchen to get to to their rooms and overhearing spippets of our conversations, it got around town that we were witches. LOL Thank god we live in the current time, it could have gotten ugly.

My mother didn’t pay much attention to me. She’s a good cook and made sure I had material things, but that was it. She’s nicer now that she’s a grandmother, but she’s very selfish and spoiled. Taurus Sun/Moon and Gemini rising.