Going to therapy - How did it work for you?

"That is not the case with every girl but my last workplace used to do this game where after weeks and months of a girl provoking, when I finally responded they would say I was stalking the girl"

I believe you. That's really f**king mean, playing with you like that, especially if they intuitively sense that you have problems! If they don't like you they should at least keep their mouths shut.

I'm sure you're not a pure, innocent, angel. But playing with a person that needs help isn't right either.

Thankyou anon. I actually came back to delete that but now you've responded.

Needs help in this context is relative because I only came on here once I had started at this place. So they were causing the problems. My previous job had no problems with girls.

The problems I had before then were trauma and PTSD related (although a comparatively mild form of those terms). Only once I met them did they become about girls.

My guidance said it beautifully once: 'We are tired of dealing with those that are obsessed with turn the other cheek.' -- I take that partly as forgiveness from a weak position isn't actually forgiveness.

I really, really should have left the place very early. The way I plan to avoid this kind of thing in the future is partly by paying close attention to my dreams. There seems to be a plan at the moment in what I am doing. Hopefully it includes positivity in relation to relationships etc. But it might not.

I do actually get a lot of female attention atm. There are a lot of social skills I don't have in this area that might be a roadblock but hopefully I can make up for lost time. Or just generally sort it out.

I expect it all to karmically line up. It was all about eclipses there. Things happened on eclipse days and synchronicity had me seeing things coming. Jan 2020 should be interesting. The last set of eclipses began on February 2017 when I started working there and ended in January 2019. When all the drama culminated in the events of a few weeks and I left. Anyone carrying the full force of that January ending eclipse into that meeting in Jan 2020 should have an interesting time. One of the Capricorns at the place once told me she believed in karma as well so that must be good news. These things also happened with Jupiter partly and it is meeting Saturn and Pluto in Capricorn soon.

It is a good astrological study.

Equal rights, baby! Both men and women are criticized by me.

I only ever caught one episode of that Dexter series but when he gets hold of the voodoo guy and intends to kill him:

'A blind man, not very sporting. But I'm not one to discriminate based on age, gender or disability'.

I've been to two therapists--one as a child, and one in college. One just listened to me talk. The other listened and then gave me a pep about self-esteem and body acceptance. Not sure if either one actually got to the root of my issues.

Shiny Taurus tried to get me to talk to a counselor once--I didn't see the point in paying to talk to someone. 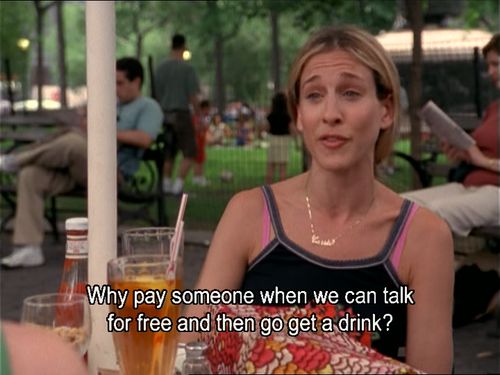 I've been seeing the same psychologist for the past two years and we really haven't had a whole lot of one-on-one therapy sessions.

I actually do something called neurofeedback that's enabled me to get my depression and anxiety under control to where it doesn't control my day-to-day life. Neurofeedback is essentially retraining your neural pathways and making it so your brain can function at its best.

Regarding the actual therapy sessions I've had, I was told to write in a journal. This was after my dad passed away last year. It helps get my anxious thoughts under control when they resurface. It also turns out that I have other issues that I need to address and overcome so that's a thing.