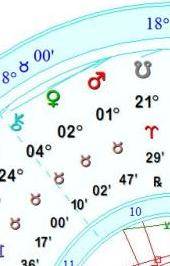 Kanye's just released, Jesus is King. It appears his religious conversion took place during Jupiter's transit to his natal Neptune in Sagittarius (opposing his sun in Gemini).

People have all kinds of things to say about this. I think I've mentioned, my son is a hard core fan of his.  I've had a couple of conversations with him about this. I'm so curious all the time. My son is 20 years old.

In the course of the conversation, I told I thought, Kanye, was his generation's Bob Dylan, who is also a Gemini. Dylan released a "religious" album and his fan's came unglued. It was at this point, you no longer had to wait in line, overnight, in order to see, Dylan, in concert.

In the other post, I pointed out the Uranus transit, conjunct the Taurus in Kanye's chart (shown).

What do you think of Kanye's new music?  What's his future look like from your perspective?

I’ve listened to snippets on iTunes and I may buy it when I get more iTunes cash. He seems not to not GAF what others think of him. He appears laser-focused on whatever goal he wants to achieve, personally and professionally. I understand he does have a gospel background (I really don’t know that much about him). People can experiment, change, find new paths, go back to their roots or delve deeper into their roots. It’s all exploration, expression, living a life one finds true.

Wow. That’s real. I like it. Listened a couple of times 😃. Thank you for posting.

Kanye and Kid Cudi have a duo called Kids See Ghosts. This is one of my faves. Great album.

I have never been a fan of Kanye West but hey if it plants a seed in young people I am all for it.