Last time we talked about how to count degrees to find the angle between two planets.  The angle tells about the relationship between the two planets.  There are some angles that are considered more significant than other angles. They are called the MAJOR ASPECTS.  They are:

The CONJUNCTION – When two planets are ZERO degrees apart (give or take 10 degrees.) Yes, that’s hugged up right next to each other. This aspect produces a blend of energy from the planets involved, like two pieces of different colored clay rolled into one marble. The symbol for a conjunction is a little circle with a line sticking out.

The SEXTILE – When two planets are 60 degrees apart (give or take 4 degrees.) This is considered an “easy” aspect.  It is friendly and supportive. It is also known as an aspect of opportunity. The symbol for a sextile is an asterisk.

The SQUARE – When two planets are 90 degrees apart (give or take 8 degrees.) This is considered a “hard” aspect. Please do not let this label freak you out. This does not mean your life is crap if you have a bunch of squares.  It means that the interplay of energy between the two planets causes some friction. Sometimes friction is what you need. You can’t start a fire without it. The symbol for a square is a square.

The TRINE – When two planets are 120 degrees apart (give or take 6 degrees.) This is another “easy” aspect. Again, don’t jump to conclusions.  People with a lot of trines don’t all just sail through life.  This just means that the exchange of energy between the planets is sympathetic and flowing. The symbol for the trine is a triangle.

The OPPOSITION – When two planets are 180 degrees apart (give or take 10 degrees.)  This is another “hard” aspect.  This is a “one or the other” type of situation.  These energies must take turns. The symbol for an opposition is two little circles connected by a line.

You may have noticed that there is some leeway for an angle to be considered one of these aspects.  A trine doesn’t always have to be exactly 120 degrees. It can be anywhere between 114 to 126 degrees and still be considered a trine. Example: look at today’s chart.  See the moon at 29 Gemini. Compare that to Mercury at 1 Scorpio. They are 122 degrees apart. So, not exact, but close enough, we’ll call it a trine.

That little give or take is what is meant by ORB.  The Orb tells how much you can cheat and still be in aspect. Generally, the more you cheat, the less strong the aspect. Also, Orbs are debatable.  Some people like very wide orbs.  Astrodienst uses notoriously wide orbs.  Some people are a little more anal-lytical and only want to consider the tightest of the tight. 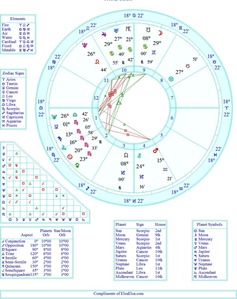 Another Venus ruled chart (See chart V). Note the position of Venus in this chart compared to the other chart.  Ruling Venus in Scorpio gives an enigmatic courtesan vibe.

The Sun – Scorpio in the 2nd House

Another Scorpio Sun (See chart II). Penetrating and investigative, this one explores the material realm.  The 2nd house is concerned with things, values and currencies. This is someone who sees deeper meaning in everyday objects.

The Moon – Gemini in the 9th house

Another Gemini Moon (see charts III & IV). This is one who wants to share ideas, but not just trivial factoids.  In the 9th needs to exchange big ideas.  Even better if they’re in French. “Because my Italian is a little rusty.”

Can you guess who else had this combination of Libra rising, Scorpio Sun and Gemini Moon?

Photographer, painter and muse Dora Maar. Check out the first part of this documentary clip on the life of Picasso and his relationship with Dora,  aka “The Weeping Woman.” https://youtu.be/M6isENqkodI

And here’s Satori, to weave some relational magic…

This Libra ascendent trines an Aquarian Mars.  Mars is close enough to the fifth house cusp to be interpreted there.  So we have a creative, playful (5th house), electric/eclectic drive (Mars), and whatever they do, they look good doing it (Libra).  With Neptune widely conjunct the ascendent, this person might be a bit of a chameleon, or be a bit “dreamy” looking.  Or they might just have fabulous shoes.

While the Sun in Scorpio and the Moon in Gemini don’t aspect each other directly, each aspects Pluto, The Sun by square and the Moon by sextile.  While the square aspect is challenging and the sextile helpful, Pluto as the ruler of the Scorpio is a more familiar energy to the Sun than it is to the airy Gemini Moon.  But in any case, the Sun and Moon share a depth acquired in their mutual Pluto contact. This depth goes a long way in blending these otherwise not-so-compatible lights.  Pluto sextiles the ascendent as well, linking all three.

Unusual in this chart is the stellium (3 or more planets) in Scorpio. In addition to the Sun we have Mercury, Venus, Jupiter and Saturn. That’s one heck of a lot of Plutonian energy in the first and second houses, and a lot of power and depth to integrate, relating to the self and its value system.  Extra emphasis, as if any were needed, is added with the chart ruler, Venus, conjunct the sun.  This is a person with depth and power, and grace and style.

While the Moon in Gemini works well with all that mojo (due to its link to Pluto in the 11th and  a trine to Mercury, Gemini’s ruler, in Scorpio) it will definitely be a breath of fresh air.  In the previous chart with so much Gemini we saw a balloon looking for a string.  Here we have a heavy basket looking for a balloon.  This lighthearted Moon is just the thing.  Social and active in the 9th house, Gemini adds bounce.  Awesome.

Finished off with a Tarot tidbit by Dixie. 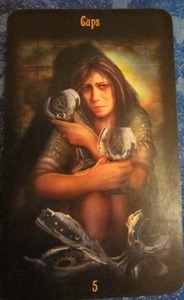 That Libra rising doesn’t fool me! Of course you’re nice, but your Scorpio wants to feel the dark side of life intensely, just for the sheer experience factor. This is a perfectly acceptable hobby and can be a great stimulus for creativity, but do be aware when you’re dredging up the blood and guts, it’s by choice. If it gets tiring, Gemini Moon gives you incredible range of options about how you feel, because your feelings follow your thoughts. This is your on/off switch. Apply liberally.

That’s our bit, so now it’s your turn. What do you see in this chart? How might you recognize this person in public? Do you know anyone who has a similar astro-mix? Comments, questions about the concepts, observations, or just test your chart-reading skills—this is your workshop. Let’s have some fun!