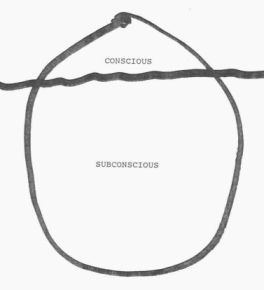 I remember waking up one day with my life in shambles. There was a bad guy in the situation but I realized at some point I had set the whole thing up, myself. I was most definitely not conscious of what I was doing when I did it but that doesn’t excuse anything. Jeez, this was disturbing.

I called a friend to report my findings and she told me, no. She said it was all the man’s fault and that was when I realized there could be a cover-up.

I could most definitely cover this whole thing up and make the man the bad guy (and he was a bad guy) but I was just too drawn to my own shadow to do that. Excusing him to examine my own motivations just seemed a more interesting and compelling path so I took and what a horror it was.

This was about fifteen years ago. What I turned up was quite gross. I discovered I was a base human being.

I have never had any illusions that I was anything but a dog and a lizard brain since. I was appalled at the extent of the damage I’d created because it was breathtaking.

I worked to integrate everything I’d discovered which basically meant, I had to lie still and let it sink in. Needless to say, after trashing my life completely by being oblivious to my own drives, I became committed to learning more about what was inside of me and this changed my life.

I now know that my subconscious has the wheel to some degree all the time. I have a friendly relationship with it though. I know I am co-creating. I know that for me, “semi-conscious” is as good as it gets.

I don’t think I’m capable of setting myself up to be destroyed as I did fifteen years ago but I’d not take this for granted. I work to be in communication with my unconscious because I can often feel myself acting on instinct. It sounds something like this:

I actually believe that last. I don’t know if it is true for others but it’s true for me.

I used to think I knew everything I was doing all the time and I was so wrong. Tuning into my subconscious and ultimately turning over the reins in large part has enriched my life tremendously.  These days, my gut leads my intellect but my intellect stays engaged and this is has been winning recipe.

I wonder how others interact with their subconscious, their shadow, their instinct. Anyone?