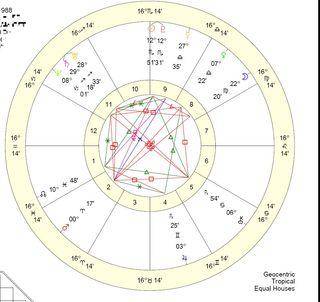 Is it possible to be too different to ever have friends? Even though I always think ‘I love my friends’ they don’t seem to feel the same way. Is it just possible that Scorpios will never have true friends or successful love relationships?

Scorpio, anything is possible but in general I don’t think this is the case. You have to take the entire chart into consideration but typically Scorpio does not have a lot of friends, nor do they want them. They generally keep maintain a very small circle of friends… perhaps just one who they trust with their lives and the other friends fall further outside but still “in” if you know what I mean and I am sure you do.

As for love, the situation is similar. Though there may (or may not be) plenty of sex, there will be a very small number of people (perhaps just one) who the Scorpio gives their heart to.

Specific to you… well you are odd. With Pluto conjunct your Sun in Scorpio to the exact degree on the midheaven no less you are incredibly potent. Everything that is “Scorpio” you have in spades yet yours is a very social chart.

Specifically I am referencing your Aquarius rising, planets in the 11th (friends) and Venus and Mars in their own signs… basically you want to relate to people.

You are 20 years old and it is not uncommon to have not met a real love at your age so I would not give up on that at all. However I would give up on the idea you are cut out for the social whirl.

People at your age tend to gather in large groups but as they get older they become more who they are. I have a life long friend (Ben) who has a chart similar to yours. He is also an Aquarius rising with a Scorpio Sun.

When I met him he was about twenty-five years old and he always had a house full of people. You had to step over people in that house to move about which is exactly what I would do as I was his inner circle and we would have to go into his bedroom to talk.

Ten years later, people still wanted to hang out as his house all the time but he no longer allowed it because he found it sucked his energy. “Those people don’t care about me,” he said. “They just want to cover over and take my energy. They eat my food, they blah, blah…” I think he even said they “breathe his air” which reflects the Aquarian need for space but you get the idea.

He concluded that most people are not worth the trouble. They just didn’t care the way he did so he stopped entertaining and whittled it down to just three or four friends who were close.

Fifeen years later, his circle of friends is even smaller now… In fact, I may be the only one in it but he is satisfied. You may be heading down this sort of path.

My advice would be to ditch convention. More is not better, especially for Scorpio. If you can find one person who feeds you consistently and does not betray you, not only are you lucky, you are apt to find it is actually all you want or need.

Can Scorpios have friends? How about a successful love life?