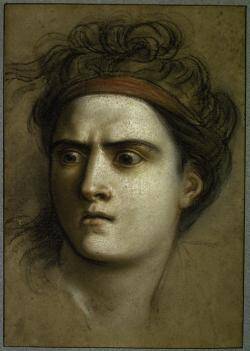 Venus has entered Scorpio, the sign of her detriment. This is where Venus is weak, trying to do her Venusian tasks with Scorpio’s Mars/Pluto tools. When Venus is in Scorpio, our love is deep and intense. But that is not always as positive as it seems.

Take the story of Medea, the ultimate Scorpio Venus.

When Medea met Jason, it was love at first sight. He was young and beautiful, with all the arrogance that entails. He laughed like thunder and smiled like sunshine. He seemed to care for nothing and no one, which made her crave him even more. He was cold and ambitious and charming and determined. He was perfection.

He had come to her father’s kingdom seeking the Golden Fleece, and Medea agreed to help him as long as he promised to marry her once the deed was done. Her father gave Jason a series of near-impossible tasks to complete, and Medea used her innate magical abilities to help him with each one, turning every situation to his favor. And when her father still didn’t budge, Medea even killed her own brother to distract while she and Jason escaped with the fleece to the other side of the world.

And her sacrifices didn’t stop there. She healed Jason’s crewmates, murdered his enemies, and even gave his infirm father his youthful vigor back. She gave everything she had – her family, her talents, her throne, her very soul – so that Jason might be exalted. And to her, it was worth every second.

For a while, this worked out beautifully. Medea and Jason lived together in wedded bliss for a decade, during which time she bore him several children. And every second of every day, she adored him. He was her golden sun, the body around which her world orbited. He was her gravity.

But despite all she gave, it wasn’t enough for Jason. He had his sights set even higher than her magic could carry him. He wanted to be the king. And when he was lucky enough to catch the eye of the king’s daughter, Glauce, he immediately abandoned Medea and their children in favor of his ambition.

Medea was gutted. She had given Jason everything – EVERYTHING. In all their years together, he had never wanted for a single thing. She had given him beautiful children, a life free from pain and fear, and every source of joy and pleasure a human could ever hope for. And this is how he repaid her.

She wasn’t going to accept this. She couldn’t just disappear gracefully into the night, as if this is just her burden to bear. No! She gave him everything he had, and as far as she was concerned, it was hers to take away.

So she hatched a plot.

On the day of Jason’s wedding to Glauce, Medea sent the bride a gift. Glauce gasped as she beheld the glittering coronet and shimmering dress, a vision of gauzy perfection. The bride smiled, comforted in the belief that Medea had given the union her blessing. But when she put them on, her smile disappeared. Her body began to convulse, and foam seeped from her perfect ruby lips.

When her father, the king, saw what was happening to his sweet daughter, he ran to her and held her tightly, causing his own body to absorb some of the poison. And so king and princess died together.

When a messenger told Medea all that transpired, her heart hardened with grim determination. Two down. Two to go.

In the midst of the chaos, Medea marched with her two youngest children right up to the palace, where Jason was wandering in a stupor. When his eyes caught hers, he was filled with horrible knowing. It was her. She had done this.

But Medea wasn’t done yet. Steeling herself and fighting against every instinct in her body, she raised a dagger.

“I gave you everything, yet you spurned my gifts. Now, I take it all back.”

She plunged the dagger into her children’s chests, keeping her eyes on Jason the whole time. As he crumpled into a heap of grief, Medea was spirited away by a divine chariot, off to rise and fight another day.

Scorpio is one of the most supportive signs in the zodiac. Venus in Scorpio will give everything they have, all the resources at their disposal, for the comfort of their loved ones. There’s nothing they won’t do. But when they give so much, any betrayal is catastrophic. For them to care so much and have it be in vain…well, it’s no wonder that many turn to revenge. Their love turns off like a light, and all that is left is cold, stark vengeance.

That is Venus using Mars and Pluto tools. Venus in Scorpio channels Pluto by loving deeply and obsessively, and by sharing resources and power. And with the pure relentlessness of Mars, Venus keeps giving and giving, seeking always for her intensity to be reciprocated. And if it’s not, Venus calls upon Pluto and Mars to rain destruction on those who wronged her.

Venus is Scorpio can be a beautiful thing. Deep, powerful, supportive love is something we all dream of. But let this story be a lesson. No matter how much you love someone, remember to reserve at least some of your resources for yourself. Don’t lose yourself in your love. And if things don’t turn out as you hope, a life well-lived is the truly best revenge.

Can you relate to Medea’s story? Have you ever been burned by giving too much? Where is your Venus?