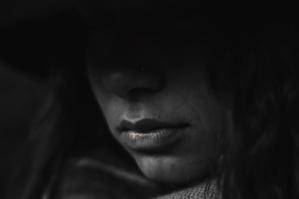 After learning a bit about Lilith’s origins, how then are we to interpret her in a chart? There are many phases of the Lilith journey, but it almost always begins with a wound.

Drawing from the Kabbalistic tales, as well as the Alphabet of Ben Sira, we see that Lilith’s story begins happily. She is created and sees herself as a reflection of the beauty of creation, sharing equally in the joy and splendor of the garden. But she is soon disabused of this notion, with Adam demanding that she lay beneath him, and making it clear that she must always submit because she is fundamentally inferior to him. She tried to make her case that they were made from the same earth, created equally in the eyes of God, but he merely doubles down. Stricken, humiliated, and terrified, she cries out God’s ineffable name for help, and runs from the garden.

As she hid to nurse her wounds, she undoubtedly expected God to help her, to restore her place and enforce what seemed to be obvious justice. Instead, God sends three angels after her, and they meet her with threats. They don’t ask her what is wrong, or how she is feeling, or what can be done to restore peace and make things right. Instead, they tell her that is she does not go back, her children will be doomed to die. When that isn’t met with immediate submission, they also threaten to drown her in the sea. She, who fled from obvious injustice in hopes of safety and comfort, instead has her life threatened to get her to go back to a life of subjugation. The authorities, those who are meant to help and keep her safe, have failed her and traumatized her further.

Then she reacts as many in this situation do, and much as you would expect. In a fit of pain, she turns to self-abasement and rejects all that is good just as it has rejected her. She screams for the angels to leave her alone, and says that she was clearly created only to cause sickness and pain. She internalizes their judgement and becomes that which they fear and despise. She claims ownership of her life in the only way she knows how.

This story is heartbreaking. It’s also all too common even in today’s world. Even now, victims of all kinds of abuse, who are hurt, degraded, and dehumanized, often in their own homes, are treated terribly by authorities. They are grilled, doubted, retraumatized, and dismissed by the very people who are meant to help them. And many react in much the same way as Lilith. In cases of sexual abuse, it is common for survivors to become sexually promiscuous in order to reclaim that part of their lives on their own terms. They might also swing the other way, gaining weight, wearing baggy clothes, doing everything possible to become that which a potential aggressor would despise.

All of us start out innocent. All of us start out believing in the kind of world in which we belong, we are safe, and we are valued. And most of us, at a certain point, will be wounded by the world and devalued. And many of us will be further wounded by the very people who are tasked with helping us. It is in these moments that we become Lilith. Wherever she exists in our chart is where we should look first for that pain. While her story does eventually improve, providing a template for our own healing, our Lilith story almost always starts with raw, howling, wounded fury. And when we understand where it comes from, we can finally start to heal.

Do you have your own Lilith wound? Where is Lilith in your chart?