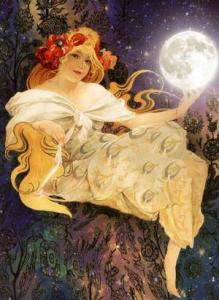 Venus is entering Virgo, the sign of her fall. This is Venus’s least favorite place to be, the place where she must accomplish her Venusian tasks using Mercury’s tools. When Venus is in Virgo, we are driven by the need to discern, serve, and perfect. And while that has its merits, it can also be heartbreaking.

Take the story of Astraea, the original Virgo.

Humanity wasn’t always like this. There was once a period, so far in the past as to defy memory, in which humans were perfect. They were kind and loving, living simple lives without warfare and strife. During this time, the gods walked among them. And there was one goddess in particular who loved humanity most of all.

Astraea adored them for their simplicity, and she took great joy in passing down guidance and helping shape society. Her merciful heart meant she spent her days urging humans to be kind and learn the joy of serving each other. She loved them, and they loved her right back. They came to her to dispense justice or mercy, they rejoiced in her generous abundance, and they were honored to be considered her children.

But, as always, the good times couldn’t last. Astraea noticed that with each passing generation, humans were changing. They became cruel and filled with avarice. They discovered weapons and began to conquer each other. They were simply no longer perfect.

One by one, the gods withdrew from the earth to live on lofty Olympus. But Astraea, loving humans as she did, decided to stay. She walked among the people and tried to remind them of their own greatness. She mediated disputes and urged them to lay down their arms. She pointed out their many flaws, but the more urgent her pleas, the more flaws seemed to appear. She served them with everything she had, but they never seemed to improve.

Finally, she couldn’t take it anymore. She drew up her strength and shouted with all the might of her heavenly voice, “Humanity! Do you not see? You have abandoned the ways of your forebears and forgotten their glory! Now you have become imperfect, and unless you change your ways, your children will be worse still! Heed my words and allow me to fix you!”

But the humans just stared at her.

Astraea, heart wrenched with anguish, called upon mighty Jupiter, king of the gods, to take her away from earth and humanity’s wickedness. Taking pity on her, Jupiter heeded her request and placed her aloft in the skies, where she became the constellation Virgo.

The people, for their part, simply shrugged and returned to their tasks. Life had changed. People had changed. Astraea was glorious, no question, but if she couldn’t accept and understand them as they were, then maybe her leaving was for the best.

Astraea embodies the best and worst of Venus in Virgo. She was tireless in her service, infallible in her kindness, and truly made life better for everyone. But Virgo’s desire to make things perfect eventually caused her to lose touch with humanity’s value and instead see nothing but flaws. And then Virgo’s famous discernment turned to pickiness and disgust as the people she loved failed to live up to the potential she saw in each of them. But no one likes to be considered a project, and so humanity rejected her in turn.

Venus in Virgo can be a beautiful thing, and the world would be a mess without it. But let Astraea’s story be a cautionary tale. Love isn’t in the details. Mercury’s tools just won’t work. In fact, love is one area in which a little imperfection can be perfect after all.

How do you feel about Astraea’s story? Do you think she did the right thing? Have you ever had to turn your back for similar reasons? Where is your Venus?