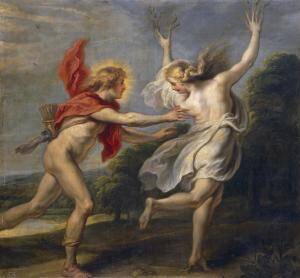 The Sun is the glittering, shining core of who we are. It is the very essence of our being. It is the vehicle of our individuation. It makes sense that it can shine more in certain signs than others, but how can the Sun ever really fall?

Let the tale of Apollo and Daphne be your guide.

Apollo took a deep breath and tried to settle his nerves. It had been a bad week. Kicking himself for his pomposity, he recalled how he had mocked Eros, the god of love. He had laughed at the way the young god’s pudgy fingers gripped the bowstring as he fired off his arrows of love and hate. But never in his wildest dreams did he imagine that Eros would turn on him.

And now he was stuck. Having been struck by the arrow of love, he was besotted, absolutely beside himself with infatuation for a young nymph named Daphne. And what was worse, she barely seemed to register his existence. And when she did look upon his, it seemed that her face even registered disgust.

But how could that be? He has the Sun god! He alone illuminated the sky and shined his brilliant light upon the earth below. He was the most radiant being in the universe! Surely she had to love him.

So he began to follow her. He knew, just KNEW, that if she took a moment to speak to him, to get to know him, that she would love him as much as he loved her. For days and weeks he continued his pursuit. And has he continued to follow, his own light grew dim. He just couldn’t understand what was happening. Was something wrong with him? Maybe he wasn’t as wonderful as he thought. Maybe his radiance held less power of attraction than he had guessed. He began to falter.

But still he kept up the chase. If she could love him, really love him, he would be okay. If only she could look upon him with the same glowing admiration reflected in his own gaze, he could again rise to the heavens and beam his rays throughout heaven and earth. All he needed was her love.

But just as he was about to catch up with her, about to make his final plea for her affection, Daphne turned around to face him. His breath caught in his chest. Was this it? Was this the moment he had been dreaming of for so long? His face lit up with hope.

But instead Daphne raised her arms and called out to her mother. And Gaia, goddess of earth, heard her daughter’s plea. Apollo watched in a mixture of horror and awe as Daphne’s limbs began to lengthen and stretch upward while her soft, supple skin began to roughen into bark. He closed his eyes, and when he opened them again the transformation was complete. His beloved Daphne had won. She was now a majestic laurel tree, safe forever from his grasp.

With a heavy heart, he took a cutting from her graceful branches and wove it into a wreath. From now on, this would be the symbol of victory, forever commemorating his defeat at the hands of love.

In Libra, the Sun is no longer concerned with its own individual success. Instead, like Apollo, the Sun begins to measure its worth by the approval of others. It derives its sense of power through union with other people. And in doing so, its own light dims.

Of course, Apollo’s fate need not befall every person with the Sun in Libra. But it should serve as a warning. By neglecting our own light, we fail to give the Sun it’s proper place. We fail to develop into the shining individuals we were meant to be. And in doing so, we actually make ourselves less attractive to others. And as we focus solely on nurturing love, we fail to nurture the spark in ourselves. Love is wonderful and union with our beloved is truly divine. But no matter what, we are always ourselves first.

Do you have the Sun in Libra? How do you maintain your shine? 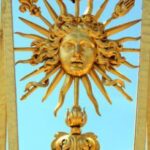