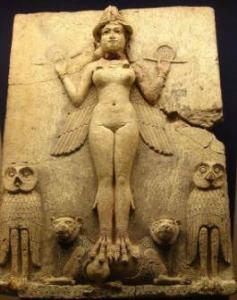 When attempting to get a sense of how to interpret an object in a chart, traditionally one of the best ways to go about it is to look to the historical and mythological origins of the body for which it was named. Mars is the god of war, and so we interpret that planet as anger, cuttings, drive, etc. Venus is the goddess of love and sexuality, so Venus in the chart is about love and pleasure. But when attempting to interpret Lilith, the waters are much murkier.

This is because Lilith’s mythological origins are murky, to say the least. We really have very little recognizable information about her until the middle ages. We can say confidently that she is derived from ancient Mesopotamian (Sumerian, Akkadian, Assyrian, Babylonian) demons, but that is about as far as we can go. The first mention of her we have on record is in an Assyrian addition to the Epic of Gilgamesh. There she is described as making a home in a huluppu tree that Inanna is attempting to grow. She is presented as a barrier to the tree’s health. But as scholars delve further into the etymology, it seems clear that the text is actually referring to a class of spirits, possibly associated with wind. It could also be referring to screech owls, as most mentions of the lilitu in the Hebrew bible are translated. As such, it doesn’t look like we’re working with the Lilith we know today. The same can be said for most ancient mentions of her.

It’s not until the middle ages that we get some of the lore that we might recognize. The first story we have of Lilith’s origins is from the Alphabet of Ben Sira, in which she is described as Adam’s first wife who refused to submit to him sexually. She then fled Eden and took up her life as a demon, vowing to cause sickness and death to infants. This story is part of a larger work that is thought to be largely satirical (seriously, try reading it sometime. It is…something else). It’s possible that it was even satirizing the common practice of creating charms to protect homes and children, since we have evidence of incantation bowls and amulets being used for many centuries before the book was compiled.

But from there, Lilith’s myth was further fleshed out by mystics over the centuries. She is mentioned several times in Kabbalistic literature, where she is associated with seduction, particularly with nocturnal emissions. She is thought to be the cause of these emissions, copulating with both men and women either in their sleep or in disguise in order to bear demonic children.

Her myth is taken up again in the 19th and early 20th centuries, where is featured regularly in both literature, as a femme fatale, and in occultism, as a protector of witches. Finally, with the advent of the modern women’s rights movement, she was transformed into the symbol of feminist defiance we understand her as today.

So what does all of this mean? I think the confusion surrounding her place in history is an essential piece of her nature. She is unknowable. It also indicates to me that her dark feminine archetype is one that society has been uncomfortable with for millennia. It has been reduced to simply an evil essence, it has been feared, it has been minimized. But the archetype has remained. And our discomfort is the point. We have never known entirely how to handle a willful, headstrong, defiant woman, one who takes what she wants and rejects what she doesn’t, who insists on her rights and won’t take no for an answer.  We’ve never known where they fit. But I think it’s about time we figured it out. Despite all our attempts to relegate this energy to the fringes, the archetype remains, defiant, dark, and persistent. She remains. Isn’t time to hear what she has to say?

What do you make of Lilith’s jumbled origins? How does it play into your understanding of the energy?