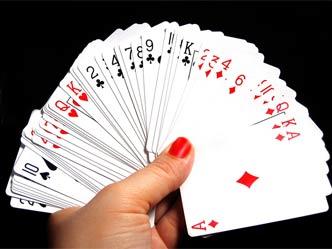 I’ve been sitting on this for several weeks, trying to figure out how to write it.  First, I want to say that I think this is more of a problem for young people then it is for older people. A young person who is inherently deep and soulful can be quite damaged when they cross paths with someone who is more superficial. Of course the person with the depth might lash out and cause some damage of their own but that is not what this is about.

This is on my mind because I have a client with a lot of depth who got involved with a man who had very little. It wasn’t immediately apparent but after awhile I  realized he only had three cards.  He had three cards where she has a whole deck of fifty two but he played his cards so well, he really jacked her up.

I’ll tell you what his three cards were (and are and will continue to be).

What struck me about this is that she’s the one with the full deck but he was the one who had command so here is my advice: If you are also holding 52 cards, stay away from people who only have 3! Also, learn to play the cards in your hand.

Here is a Nick Lowe tune, for the quirky out there – The Gee And The Rick And The Three-Card Trick. A song like this is how I diminish a man like the one I described.

How many cards are you holding and how well do you play them?