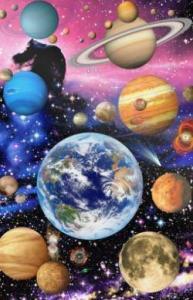 Ralphie writes on How To Interpret Transits:

“I’ve been searching everywhere but can’t seem to find an explanation anywhere about the difference between when an aspect is at its “most powerful” and when it is “exact.” What is the difference? and how can they be determined?”

I feel transits are most powerful when they are coming in or “applying”, as we say in astrology.  Here’s an example:

Let’s say your sun is at 10 degrees Leo in your natal chart. Transiting Saturn is at 7 degrees Leo. At this point the transit is applying.

The idea a transit would be more powerful when applying than it is when it is exact may seem counterintuitive.  But in practice, what happens is when the thing is coming upon you, you’re really aware of it. By the time the transit is exact, the energy has been absorbed to some extent.  You’re acclimated. You’re in it!  It’s like wedding jitters, as compared to being married!

Once the exact aspect has passed, I find things settle down pretty quickly.

But that does not mean, Pluto moves on and your feelings go with it.  This applies:

Outer Planet Transit? Expect To Lose A 10-Year Chunk Of Your Life

However, once a transit has moved on there’s rarely anything new to deal with. It’ll be the “devil you know”.

Just to be thorough, planets do turn retrograde so here’s another version of the example above.