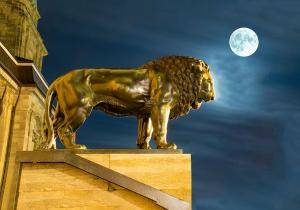 Recently I’ve had a streak of clients with the Moon in Leo, and there seem to be a lot of misconceptions about that placement. It’s Leo! Leo is shiny and bright, so these natives must be walking rays of sunshine, right? Leo is bold and confident, so they must not have to wrestle with insecurity like the rest of us! This placement must be a cakewalk! Well, not exactly. In fact, I would argue that it is one of the harder places to have the Moon.

You see, there’s a fundamental difference in nature. Leo is shiny, bright, and public. Leo is on a stage. Leo is always aware of its audience. But the Moon is private. The Moon is soft and mushy and vulnerable. Leo wants to express. The Moon wants to feel.

And since no movie is complete without an audience, they sometimes turn to external things for validation. One woman who is very close to me has this placement. Growing up, her father was very dismissive and largely ignored her. She has spent her entire life attempting to fill that make up for his disinterest. She has transformed herself with cosmetic surgery, shrunk herself to skeletal proportions, and developed a pathology that borders on nymphomania all to obtain male attention in an attempt to fill that yawning void inside her. Little does she know that she shines so brightly already, without all the window dressing.

And that is the real lesson for Leo Moons. They must learn to shine on their own, for their own sake. Not for their audience, or for others’ expectations. For themselves. That is how they save the world. Through radical authenticity and a devotion to their own happiness. Because if other people can see that even someone as amazing, beautiful, and powerful as a Leo Moon person can feel insecure at times, they feel less alone. And when other people see Leo Moons feeling the insecurity and getting out there and living boldly in spite of it, they can be empowered to do the same. That is the purpose.

And don’t get me wrong. Leo Moon people can be absolutely wonderful. They are bold and brilliant. They are perennial cheerleaders and lionhearted warriors, always looking out for the underdog. They can love hard, fight hard, and look good doing it. But it is only when they learn to shine with their own light that the truly access their gifts. Only when they step out of the shadows do they learn that the light was within them all along.

Do you have the Moon in Leo? How have you learned to shine?