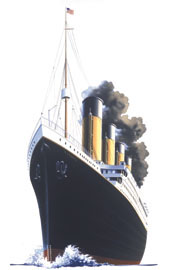 Here is a Jupiter in Sagittarius question regarding your beliefs. Carielle wrote about a series of traumatic events during a Pluto transit and wound up with this:

“…and have gotten better, which is probably a good thing, as people were starting to ask me what I did to piss off God that badly.”

This was interesting because I was going to post on exactly this topic. The soldier feels he pissed off God quite severely at one time and he is now living a series of lives… many, many, many, many lives meant to teach him a lesson. We were talking about this more extensively this weekend and he said…

“I am here to tell you, that you just don’t want to go around pissing off God. For example, take the Titanic. That guy said, God couldn’t even sink this ship! So what do you think God is going to do? God is going to teach that guy a lesson, that’s what. And not only is he going to sink the ship, he’s going to do it with an ice cube! There! There is your ship, God can’t sink! I sunk it with an ice cube, you bastard!”

Do you think it’s possible to piss of the Universe?