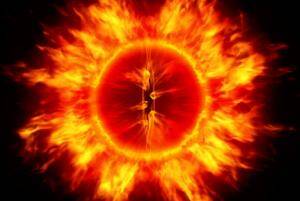 Planets are almost always moving. They zip along through the zodiac, and then they sometimes swing backward and move retrograde. But every now and then, as they are transitioning between forward and retrograde movement, they appear to stop. Just like a pendulum seems to pause at the height of each swing, so do the planets. These pauses last anywhere from a few hours to a few days, so they’re not especially common. So what happens when you are born with a stationary planet in your chart?

When a planet is stationary, it gains power. Instead of waving breezily as it passes by, it stops and makes itself comfortable. Its presence is stronger and more intense. It gives oomph to the planet’s influence.

It’s like the Eye of Sauron in The Lord of the Rings. As the eye passes over people, they feel a tingling sense that something is not right. But when it fixes its gaze, people seize, shake, and are completely overcome by its power. It simply can’t be ignored.

And this is true even if the planet is otherwise weak. For example, my Saturn is not strongly positioned. It is hidden away in the 8th house and only makes one wide, weak aspect. It shouldn’t be a major influence. However, Saturn was also stationary when I was born. My life has been one profoundly shaped by Saturn influences. I have some of the strongest boundaries of anyone I know, I work almost constantly, and slow, steady progress is the name of the game. I might not always love his influence (does anyone?), but it is huge in my life nonetheless.

And if a planet is already strong, it can create an oversized influence. I say this from experience, because Jupiter is also stationary in my chart. And while Jupiter is stuck in the 12th house, it also trines 6 planets and sextiles another. He doesn’t need any help exerting his power. And yet, with that stationary quality, Jupiter is often running the show. Everything about me is BIG. Every planet that Jupiter aspects inflates like a balloon. Knowledge, perspective, generosity, and growth are paramount. It feels like Caesar going from a great general to being titled Imperator. Jupiter was already strong, but being stationary makes him king.

So I encourage you all to take a look at your chart and see if there are any planets that were reversing course as you were born. It could really shine a light on who rules the roost.

Do you have any stationary planets? What is it like?