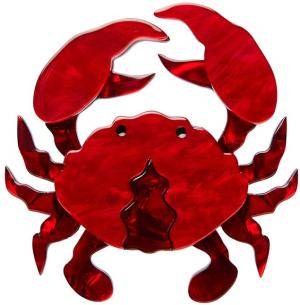 Venus is the planet that rules what we intrinsically value in relationships as well as how we value ourselves. What does a man with Venus in Cancer want?

I want a girl….just like the girl…
that married dear old dad…..

Yeah, but that’s too cliche. And what if Mom was a bitch? Nobody does cranky like a Cancer, and when a man with Venus in Cancer had one of the snappy, broody mom-types, he does REALLY WELL with women who treat him like a child and boss him around. The trouble is, he will act like a child. Or worse… he will just be plain mean to all women, perpetually on the defensive.

However, if he had the “good mom”, then every single domestic thing you do for him is telling him you adore him, and that’s his love language. Make him soup when he’s sick? He’s yours. He is not prone to lavish demonstrations of excess (in other words, he can be tight with money) but if you’re a girl who doesn’t need splashy displays, he’s the best friend you’ll ever have going to antique malls and garage sales.

He will listen to your feelings. He will care about your feelings. You’ll swear he has a uterus. He is…. emotional and sentimental. He’s also really prone to being hurt, and if you’re mean, he’ll scuttle into his cave and you’ll rue the day, because he won’t forget how you hurt his feelings. He’ll remind you of it a year later. Water doesn’t forget. So if you value your sensitive, kind guy, you’ll take your snark somewhere else or at the very least make sure you start a rampage with “this is NOT about you” so he’ll go into sympathetic mode instead of having his claws up.

This is a loyal Venus. Once they’re at home with you, and you’ve got a routine going, they thrive. Don’t take him for granted, just because of this combination of the 2 most female signs in the zodiac. It would be easy to think he’s a sissy. He’s not.

Appreciate him for his ability to feel where others are devoid of emotion, and snuggle up. Try to put up with him bringing you breakfast in bed, you poor dear!