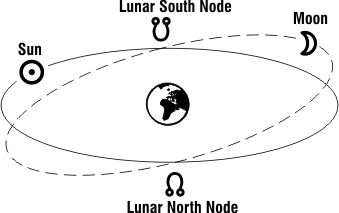 We are familiar with the Nodes of the Moon, where the Moon’s orbit intersects with the ecliptic (the celestial ‘line’ that marks the Sun’s yearly apparent motion in the sky). The lunar North Node is at the point in the Moon’s orbit where it crosses the ecliptic in a northerly direction. The point opposite to this, the lunar South Node, marks where the Moon crosses in a southerly direction.

If you have astro software, you should be able to choose to include planetary node placements on drawn charts. Otherwise, I have included a link to an ephemeris that will calculate these, plus directions, at the close of this article.

Much has been written about the Nodes, from their significance of past lives, earthly destiny, entrance and exit points of celestial energy, etc., but little consensus is available. I do not seek to resolve these differences here; instead, I want to note the similarities between these conceptions and from there move on to looking at the nodes of other planets. Ultimately, we have a lot of freedom in interpreting the nodes, but it does seem clear that they mark points in a cycle of the overall significance and influence of a planet, and thus should not be interpreted as energetic bodies themselves. This is why orbs must be kept very close in interpreting their conjunctions. Further, because the nodes are merely points, they do not cast rays or make aspects.

The nodes (North and South) represent, essentially, ascending and descending stages. We can conceptualize the North Node as an equinox of sorts as, e.g., the Moon departs the southern part of its orbit and begins ascending. This fits with different conceptions of expansion (sometimes the lunar North Node is said to expand the effect of a planet it is conjunct) or connection to something higher (ideas of soul development, destiny) as the Moon literally is moving north. Similarly but conversely, the lunar South Node is associated with a descending stage. Thus we see associations with things that we are tied to, with old modes of functioning, the past, reflection, etc. Additionally, we encounter the rationale by which the lunar South Node is said to decrease the effects of a planet it is conjunct – because the South Node represents the body leaving its northern orbit and descending.

Following this connection between the North Node with the initiation of an ascending phase, and the South Node point with the initiation of a descending phase, the Nodes of a planet can show where its influence is increasing or subsiding. A planet conjunct its own North Node may contribute to a stronger experience of this planet, perhaps in the acquisition or development of some unexpected or new aspect of this planet’s effects. A planet conjunct its South Node may indicate a receding of this planet’s energy in a native’s life, perhaps a lack of something we expect from its northern cycle, perhaps a reprieve from something challenging.

Any celestial body placed conjunct its own North or South Node is automatically on the ecliptic. As the ecliptic defines the plane of the Sun, it is possible that a planet in this position expresses itself more strongly, as it is on an axis that directly receives the Sun’s rays. Pay close attention to any planet you have in your chart that is conjunct its own North or South Node – the energy of being on the Sun’s plane may make it more sensitive to transits or more active in your life. This oft-overlooked factor may also contribute to identical planetary placements expressing in varied ways among different charts – someone born with Mercury in Gemini at a time that Mercury’s North Node is also placed here will experience it differently than an identical Gemini Mercury placement when its North Node is in, say, Aquarius.

Now that we’ve distinguished the ascending from descending phase, we can apply this in the context of the other planets. With Mercury, for example, conjunction with its N. Node or placement along its northern trajectory may indicate an upswing in mental pursuits, travel, connections, writing – someone who is expanding in, developing, or drawn to the areas and activities represented by Mercury. Conversely, S. Node may represent a decrease or recession of the importance of these in the native’s life. Going planet-by-planet from here is pretty straightforward as long as we bear in mind this ascending/ descending pattern.

As promised, here is the link to the ephemeris to calculate the placement of the planetary nodes for your chart. You may enter the date and time at the top of the form, along with the bodies you’re looking for data on (results display better with not more than four or five bodies at a time). For simplicity’s sake, I recommend changing the ‘# of days’ field to 1. At the top of the left hand column of field options, select the boxes next to ‘nNode’ and ‘sNode’ and submit.

If you take the time to calculate it, I’m curious: do you have any planets conjunct their own Nodes? Comment with which planet, its sign and degree, and which node it is conjunct, and please share your experience with that planet! It is hard to come by information on the planetary nodes, so let’s open this space for brainstorming.