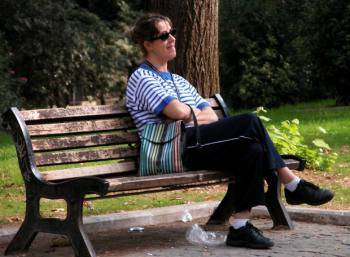 My friend, Yoko came over with her kids a couple days ago. She has three girls, age 8-16. This was the second time I met them.

I don’t know what they think of me. I guess they like me okay, but at one point I stood up, and I couldn’t walk.

Now I hustle pretty well. Not in a “can’t relax” kind of way. I can relax, but when there is something to do, I do it. And if you’re a guest and you ask me for something, I’ll get it for you. So I move around a lot and I move around easily, except for here recently.

So I got up and I couldn’t walk. All three girls looked dumb…or even horror-struck.  It’s not really something I can explain. I’m not kidding. I have no actual explanation for this so I just said, “It’s okay. This happens, I’ll be okay.”

They looked relieved. They looked happy, even. I don’t know what they saw.  But I imagine if I’d been around a person awhile and they stood up and stopped the way I must, I’d be scared. I’d be wondering if they were having a heart attack or a stroke, or perhaps just going to keel over dead.

It’s so unexpected, see? You’re not seen it before and something is clearly wrong. So if they tell you it’s okay, there has to be relief, followed by intense curiosity.

Now I don’t mean to be secretive, but I don’t fully understand not being able to walk. Because right before I couldn’t walk, I was walking without issues. So I didn’t want to try to go into this with these girls…and 8 year old? I knew if I stood and held onto something for a ten or thirty seconds, I could most likely hobble on my path..probably. And this is what happened. A few minutes later I could walk again.

On the witness, I also had a house guest. I talked to her about this after they’d left. “Those girls we’re shocked,” I said. “They’ve never seen that before. I am usually running all over the place.”

She said it was not just that. It’s that I don’t complain. I’m not whining or saying, poor me. She assured me this was strange.

Well I’ll tell you, I can’t imagine whining. It would not occur to me in a million years.

I guess I’m just trying to get things done. In this case I needed to get something from the kitchen. It was the task. It was the goal. And while I’d have liked to not have a problem, having a problem changes nothing,

I think this might be a Saturn Neptune thing. If you see me run around all the time and then I can’t walk, is it real?

It’s a good thing that I can’t walk often otherwise I would probably forget. I’d forget because it’s not what’s important to me. But I understand (because of the frequency and intensity) I have to make it important. But I’ll tell you this…

I don’t think I will ever be defined (Saturn) by a disability (Neptune). My individuality (Uranus) is just too pronounced, as is my life force (Sun).

I have no idea if this was discussed by Yoko and her daughters when they left, but if I was the mom? I’d tell my kids, “Yeah, she can’t walk but she ignores it and you can do the same. If she needs help, I’m sure she’ll ask. Elsa is not shy. She’s fine.”

Note on the pic -it’s from Morguefile.com. I searched “individual”. That’s what she looks like, huh?

I feel that many people have surrendered their individuality. Tragically.