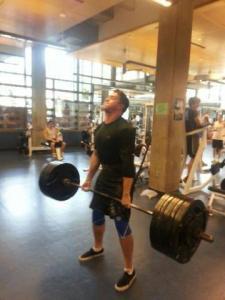 Monday the Sun in Libra squares Saturn in Capricorn. The general atmosphere makes run-ins with authority and the establishment likely. That can also be your inner authority. If you’re bucking the rules, or bucking your own rules, take note. As they do say: Something’s gotta give.

The Sun in Libra favors being polite about it. Mars applies into opposition with Chiron, exact Tuesday. Also Tuesday, Venus hits Scorpio – known for wanting something not on the menu, something scandalous.

While the Sun-Saturn square is exact Monday, its influence lasts. The Sun moves into square with Pluto all week long, peaking on the weekend in full moon t-square with Pluto. That’s a mic dropper right there, bomb dropper possibly.

Venus in Scorpio is titillated by unsanctioned action, and Scorpio Mercury mouths off sometimes (usually a smart remark that elicits a laugh or a cringe). Do we know better? Of course we do, but desiiiiiire. Pluto in Cap can deliver consequences.

Luckily Mars in Libra dithers. Weigh those consequences for sure. Experience is said to be a good teacher. It doesn’t have to be worst case scenario.

I’m not saying you’re going on an armed police chase. But what I am saying is to know where you’re going with something. What are we supposed to learn? What rules work for us and which ones don’t. Once we have a handle on that, we can move toward removing or revamping the structure.

After hitting Scorpio on Tuesday, Venus moves to oppose Uranus in Venus-ruled Taurus, exact on the weekend. There’s an element of novelty, of surprise. Of shock… perhaps. But we could also get what we desire – that’s always a possibility.

While the Sun’s squares speak to structure and authority over our conscious agency, Venus opposite Uranus can be a redirect on what we want. In Scorpio, these desires run deep, and dark. They’re powerful and sometimes shadowy. How that hits and how the two influences interact is unknown, but intense.

It sounds rough, yes? But also titillating… yes? Change is hard. Change is GOOD. It’s exciting. It can even deliver pleasure.

Mercury in Scorpio uncovers truth. Mercury is moving into trine with Neptune. If we’re alert and dig, there are delightful secrets whispered. Sometimes we grab them right out of the air. Listen to your muse.

The Mars-Chiron opposition and the Venus-Uranus opposition cross. By the end of the week, Mars and Venus move into orb of semi-sextile – setting up an echo chamber for the coming full moon. How we refine what we want and what we learn about getting it with authentic and righteous action set the stage for busting out of our old paradigm for personal power. Busting out creates space for something else.

What else? It remains to be seen. It’s under wraps for now, but it just might explode on the scene with a shocking bang. Or rumble from below. Or a balanced and beautiful stride. Mars and Venus are the rulers of the Sun and Moon signs in this full moon scenario.

This is setting up. Starting now. Pay attention to your interactions with others. Note and investigate what you want and what you’re inclined to do in response. Where to you bash elbows with the rules – societal and personal. Is there as simple fix, or does it need and overhaul. If it’s a simple fix, do it now.

On Monday, the Aquarius Moon starts out in a t-square with the past-exact Mercury-Uranus opposition. It moves into soothing and enlivening aspect with the applying Mars-Chiron opposition. Let challenges spur you into taking a broader approach. Look for the action that feels invigorating and beyond the sum of its parts.

Tuesday, the Aquarius Moon splits the distance between Saturn and Neptune and sextiles Jupiter. Push past your usual. The mood has wings, and the mood itself is the key to hacking your own mundane reality. Venus moves from Libra to Scorpio, cardinal air to fixed water, ephemeral to glandular.

Wednesday, the Moon moves to Pisces. The mood still resonates to broader strokes, but emotional clarity can be elusive. Let it. The mood is best approached softly. The Moon mood softens the Venus-Uranus opposition. Change may be desirable. It may even feel good. Explore that. Overnight, the Moon tunes up Mars through a yod with Chiron and Uranus, and trines Mercury. Follow your gut, your intuition. Follow those whispers. Overnight, that might mean fabulous dreams or sleep disturbances.

Thursday, the Moon finishes its trine to Mercury, sextiles Saturn, and conjoins Neptune. Overnight, it squares Jupiter and sextiles Pluto. The mood goes from exquisite to titanic. Move with it till you can’t… then move around it.

Friday, the Moon moves through the rest of Pisces then hits the first degree of Aries in the night. Emotional reactivity is likely if you don’t go with the flow. So go with the flow. When it’s time to act, act. You know the drill: Point your boat downstream and enjoy the ride. If something gets in your way, turn.