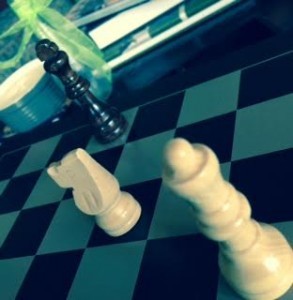 Mars is moving forward while Venus is moving back. Mercury in Scorpio is moving into conjunction with retrograde Venus, exact Monday, as it moves into square with Aquarius Mars. With all three in fixed signs, we’re looking at emerging frustrations that reignite on a subject from the past. The subject may be petty, but it’s not the real catalyst. It’s a deeper matter that pokes through.

There’s often a deep-seated question around one’s own value.

Mercury’s square to Mars is applying all week, exact on Friday. So in the context of the week, Mercury and Venus meet and Mercury chews the bone till it cracks open with Mars (ending Friday). Due to their signs, it’s reasonable to consider that increased anxiety goes along with this. It’s physical and mental. SO, the thing to do is to get this energy out in healthy pursuits.

Get out and chop that wood, carry that water. If that doesn’t do it, find a book on the subject that flags you. Read it. Exercise your mind and your body. Give that electricity somewhere else to surge besides your mouth and your fingers (fists). Run out the clock and it will pass.

Also applying through Friday, Mercury closes a trine to Pisces Neptune, water and water. Scorpio is fixed, but Pisces is mutable. Find a musical, spiritual, connected way to flow that sensual mind energy and that’s another way to dissipate the frustration.

Change the flavor, change its reception. Manipulate yourself into a better feeling story, a more digestible definition that soothes the senses.

Take a cue from Monday’s meeting of Venus and Mercury in Scorpio. What do you really want to see, to have, to understand, to express so that you’re understood? What is that? Now, spend the rest of the week finding a way to embody that.

You and what you want are an iceberg. What people can see is so limited. What they will see, even more so. But it IS an expression of the whole that is visible. Work on embodying your own essence. That’s your bait to attract what you desire.

If you want to shine out an accurate lure, be true to yourself inside where no one ever sees. Do you want to attract what you SHOULD want? Or do you want to draw what will suit who you truly are?

On Friday, retrograde Venus moves back into sextile with direct Saturn in Capricorn. When Venus comes back through again in sextile and direct, Jupiter will be on their midpoint. There’s no need to obsess, but take a good look now at what you’re willing to work for. What is it that you’ve been willing to work for over time? What still matters? In the future, Jupiter will help broadcast your iceberg in totality. Refine your own understanding now.

Lingering in the background over time, we have Scorpio Jupiter moving into trine with retrograde Chiron in Pisces. Whether we’re conscious or ready, we’re broadcasting all the time, even if it’s underwater, silent. We’re pinging ahead, finding our flow. We stretch till it hurts and we pull back. Keep expanding; it heals. In moments it can feel like we’re falling victim to our own worst impulses; but it’s two steps forward, one step back. We’re still getting there.

Monday and Tuesday, the Capricorn Moon mood illuminates the Venus-Mercury conjunction, sextiling Neptune. It conjoins Pluto and sextiles Jupiter and Chiron. It squares the Libra Sun. Be patient with yourself. Use the emotional clarity to absorb the best of what you see, feel, and hear. Dream it up.

Wednesday, the Moon moves to Aquarius and into Mars’ territory. As it moves into conjunction with Mars, it squares Uranus, passes over the south node, and squares the Venus-Mercury conjunction. Let the mood be bigger than you. Don’t take anything personally; that’s old news. Take it like a scientist – observe, notate, experiment. What feels better or worse? Now bring it back to the personal. Use your observations to create a satisfying experience.

Overnight into Thursday, the Moon moves over Mars and out on its own. Float on that impersonal line of extension. Tune in to what’s working.

Friday morning, the Aquarius Moon trines the Sun, both in air. Soon afterward, it squares Jupiter with the Sun semi-sextile Jupiter. Something deep is screaming to be felt, a source of connection to the bigger story of a rougher reality. The mood is cleaner. It could feel like you need to suppress what wants to come up, like it could dirty a sleek day. But let it come. Repression only perverts such things. Let it surface and be part of the day’s narrative. There’s something more you can make of it. It passes quickly enough and has plenty of substance to add to the mix. Consider the Jupiter-Chiron trine. Let it out so it can heal and grow into something beautiful and rich.

Are you finding issues of partnership arising, issues of communication? It doesn’t have to be romantic partnership. Are they issues you’re revisiting from some earlier time? How are you handling it?