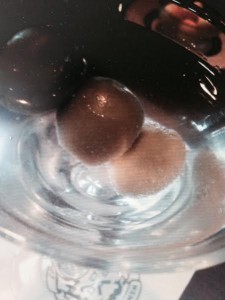 This week we have Mercury retrograde, Uranus moving to Taurus, and a new Moon in Pisces. These happen in rapid succession, starting Tuesday afternoon and culminating Wednesday morning; but they comprise the larger focus of the entire week. Change is a given, but its inception is murky.

Monday morning, the Aquarius Moon sextiles Jupiter with Pluto on their midpoint. The air is crackling with potential and we feel it. Make use of the exciting and excitable atmosphere. Observe and join in. Experiment and see how far it takes you.

Later, the Moon sextiles Aquarius ruler Uranus (at the end of Aries) with stationing Mercury on their midpoint. There’s something more, a suprise – an answer, a shock, a riddle, a joke. But it’s good – will you see it that way?

Tuesday morning the Moon moves to Pisces in prep for the mid-degree, new moon conjunction with the Sun (Wednesday). It’s a mood shift without much direction. Water takes its own course. Let it. By afternoon, Mercury is officially retrograde in Pisces. This isn’t rough water, but expect time to fold in on you. Allow extra time, extra space, and take care to emotionally regulate when things are slippery.

Overnight into Wednesday, Uranus moves to Taurus. The Pisces Moon closes a sextile to Mars in Taurus. There’s movement implied in all this. The movement may actually be predictable, but that’s not how it feels. It feels exciting. Something brand new is on the horizon. Our bedrock is set to change, get an upgrade. You can feel the rumble.

And then the Moon pulls into the Sun. The new moon takes place less than half a degree shy of exact conjunction to Pisces ruler Neptune. It also holds that sextile to Mars. We have a budding genesis and it offers a line to a solid road forward. Don’t try to nail anything down just yet. The timing’s not right. Have faith that connections are emerging and will hold fast when needed.

Wednesday afternoon, the Sun conjoins Neptune in the Moon’s wake. Feel your connection to life and let it filter back into deeper belief in self. The Moon sextiles Saturn. This all takes time; it’s appropriate to feel satisfaction now, even though you’re not there yet. You will be. Belief helps us get there. It refines our heart centered focus. That focus IS the guidance.

The Moon sextiles Pluto and squares Jupiter. It’s a great time to yearn and delight in our humanity and need. But only so far as feels good. Take it too far and you’ve got diminishing returns. Feel the edge. Let it take you there, but then reel it back in and keep a tight line. Obsessions can feel really good till they go too far.

Thursday, the Pisces Moon conjoins retrograde Mercury then goes on to Aries and over Chiron. Continue to ride those final waves waves wherever they take you. Take it in. It’s familiar territory but a different perspective. We’re learning something brand new, but we’re still rearranging old information in the short term.

Early Friday, the Aries Moon sextiles Venus in Aquarius. It also sextiles Juno in Gemini with Venus trining Juno. Our focus concentrates sexual energy with more diffuse desire. Yes, it’s sexual energy, but the atmosphere is too dynamic and airy to bring the focus into lasting expression. Appreciate the tickle and put it into practice where you can. Just don’t try to nail it down. It’s fleeting. Appreciate the rush of the moment and the feeling of fullness in being alive.

Through the rest of the day, the Moon moves toward square with Saturn and Pluto and trine to Jupiter. Do what’s necessary first. Get the have-tos out of the way and then BOUNCE! Getting things managed early sets the mood FREE!

The new moon takes place in the center of Pisces – deep in the heart of the hidden and divine. Where does this hit YOUR chart? Where is Uranus set to tour Taurus in your chart… and how is Mars in Taurus paving the way in your life?