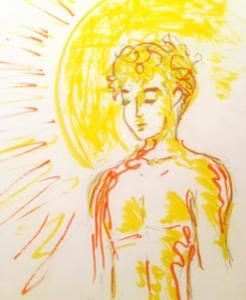 Monday morning, the Leo Moon opposes Venus. It goes on to trine Chiron and square Uranus before heading into orb of opposition to Saturn. Save your drama for later in the week and soak up the sunshine now.

Do your work, but take breaks. When the mood hits, luxuriate where you can!

Tuesday morning, Venus moves into orb of sextile to Chiron (exact Friday) and the Moon completes its opposition to Saturn. Outside restrictions are partly cloudy – still sunny around the edges. Be true to yourself regardless of conditions. Find the shine and get under it!

Midday, the Sun begins a sextile to Pluto as Mercury reaches orb of sextile to Uranus (exact Thursday and Friday respectively). Gear down and power up to find the trail. Opportunities abound for improvement, even if we’re still not clear on why and how. Be ready to take a chance and grab for the brass ring when it appears. Communications pop up out of nowhere and meander, but the keys to the puzzle are in there somewhere… and they’re gold.

Mercury moves closer to conjunction with Jupiter all week long, as we tune in to a higher frequency more clearly and with greater confidence, bit by bit. Pay attention but stay in the flow.

Mars and Venus move along together in Uranus ruled Aquarius and head toward square with Uranus all week. Desire and follow through may be fickle, but if you lose something – or miss something- it’s a good miss. As in, it’s for the best.

On Wednesday, the Moon moves to Mercury-ruled Virgo. It opposes Mercury then trines Uranus. The mood can be contemplative or critical, compassionate and caring or too targeted to rest. It may also ping between the extremes. However, it’s also likely to do so in a way that stays on track and winds up bringing end of the day satisfaction if you conscious avoid the pitfalls of overwhelm (take breaks!).

Thursday’s Virgo Moon opposes Jupiter and Neptune for more of those extremes but also more satisfaction. Overnight the Moon opposes the Pisces Sun: the full moon. As the full moon perfects, it also trines Pluto.

There’s no promise the fog will lift. However, the addition of Pluto in aspect of ease in cardinal Capricorn lends a powerful pivot point. Whatever ends, ends for the best reasons: to make way for something divinely inspired.

My best advice? Pay attention with all your senses. Take your time and mind the details. Then let your attachment to the outcome go, if you can. More than anything? Remember you’re not alone. You’re never alone.

Early Friday the Moon moves to Venus-ruled Libra and a trine to Vesta. The mood is lighter, more social, more pleasant. It feels good to devote our desires somewhere distracting but still meaningful, humanitarian, or caretaking.

By afternoon the Moon heads into trine with Mars and Venus, exact in the night. Play nice with others just because you can! It’s okay to do nice things merely because it makes you feel good. Everyone wins!

The full moon in Virgo takes place overnight, Thursday into Friday at 27 degrees. Where does it impact your chart?