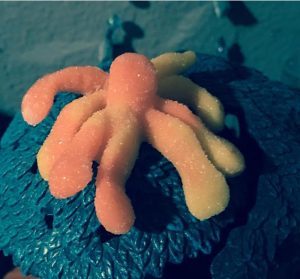 Monday morning, the Aquarius Moon conjoins Juno, sextiles Chiron, and squares Uranus. It goes on to conjoin Mercury and Saturn as Mercury moves closer into conjunction with Saturn (exact just before the new moon on Wednesday morning).

Mars and Venus are past their exact conjunction in Capricorn, but they move together to conjoin Pluto (exact the morning after the new moon). This applying aspect amps up the atmosphere surrounding the new moon, as the desires themselves and the urge to act intensify with each hour and day.

Monday’s Moon highlights what we think and feel about what’s happening in and around us. It can help us to be frank with ourself and others about the true impact of our changing perspective. It also helps to nail down our exact stance on where we are in the moment.

Also applying is the Sun’s sextile to Uranus, exact Tuesday night, an opportunity to change up one’s path before we set the map in stone. The Moon cruises along in Uranus-ruled Aquarius, then surges ahead into Pisces just before the Sun-Uranus sextile is exact. The mood is electric and targeted as it supports change, then dissipates into the flow of an emotional connection to the everything.

Wednesday morning, Mercury conjoins then passes over Saturn and the Moon conjoins the Sun in Pisces: the new moon. The new moon has old/new news. Something is settled, just in time for the incoming tide.

Before its exact Sun conjunction, the Moon sextiles Uranus, fusing our fresh start with new and emerging values and desires, now somewhat Pluto flavored, intense and begging for action. The new moon is peppered with kisses and they enliven our dreams.

In the afterglow of the new moon, the Moon moves into conjunction with Jupiter and heads toward Pisces-ruler Neptune. Our hearts sing, amplified and broadcast by Jupiter, enhanced with diffuse fairy light under the soft echo of Neptune. Is grief there? Possibly, but it’s also a chance to transmute that longing toward our soul’s purpose, make it meaningful beyond the personal.

Early Thursday morning, Mars conjoins Pluto exactly. That’s volcano energy, sex energy, climb a mountain though your body is burning from the effort energy. The energy to go beyond your known limits to something greater than you knew of yourself.

Ten hours later, Venus follows suit. Desires peak, obsessions peak. It can be the height of pleasure, or you may be relieved to find it abate. Or both. But whatever these conjunctions bring, it’s life changing, and probably better than you fear… because there is some fear here and possibly for some there is shame. But in the end, moving mountains and surviving brings a benefit, and a release.

As this occurs, Thursday’s Pisces Moon sextiles Vesta in Capricorn then goes on to sextile the past exact Venus-Mars-Pluto conjunction. There’s more to life than a series of moments, but the mood in this moment sheds a light on the meaning we will encode for the long haul, meaning that creates a mission – what is becoming most important to us.

Friday morning, the Aries Moon conjoins Pallas Athena then Chiron. It goes on to sextile Juno in the evening. So much emotion soup! It’s possible to hold that power without stiffening, to use it to strengthen the muscles of the body and the rigor of the mind. Let it run away with you! Its passion is enlivening, fresh, pure, and healthy. It satisfies simply.

The new moon takes place at 12 degrees Pisces. Where does this hit your chart? Are you coming to any Mercury-Saturn conclusions? Experiencing any Venus-Mars-Pluto obsessions or compulsions?