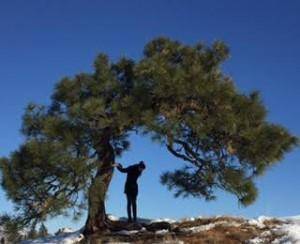 As we move between the eclipses, the aftereffects of the full moon play out as new themes emerge. Those new themes set up for next week’s new moon eclipse in Sagittarius.

Venus finishes its trine to Neptune and heads into sextile with Pluto. We’ve had the benefit of a fantasy of the ideal, a bit of a flirt with our wildest dreams. Now we get a chance to home in on what’s possible in reality. Our deepest delight may resurrect something powerful. Or perhaps we’re doing an overhaul and tossing expired desires that muck up our reputation and dirty our doorstep. Venus makes its exact sextile Thursday, that energy in effect all week.

The Sun squares Neptune (Wednesday) and trines Mars (Thursday) with Mercury following along behind, flavoring our senses and communications in tandem. Things are not quite clear and we shouldn’t expect them to be. That won’t interfere with firing up and sparking action. Just work on the list. There’s always a list. Movement improves our attitude and advances the story.

Monday morning the Virgo Moon squares Virgo-ruler Mercury. It then heads into square with the Sun and winds up in opposition to Neptune by nighttime. It’s a slow moving mutable t-square. If you expect the details to elude you, you’re more likely to make the most of the mood. You’re also more likely to see the physical signs and head them off. It’s helpful to focus on staying flexible and amenable to change. It’s even possible to find pleasure in meeting the needs of the day as the Moon sextiles Venus at the end.

Tuesday, that earthy Virgo Moon finds solid ease in trines to Pluto, Jupiter, and Saturn. The emotional boost is a powerup to find one’s center and get back on even terrain. Later in the day, the Moon hits Venus-ruled Libra and moves into opposition to Chiron. With Venus in sextile to Pluto, the Libra mood has the power to take on challenges and turn them into a win-win outcome. To look like a beautiful badass and learn something at the same time.

Wednesday’s Libra Moon sextiles Mercury then the Sun. It goes on to oppose Mars. It’s that seasonal cheer that drives socializing! Put your own safety and the safety of others first, but don’t miss out on full engagement even if it must be virtual (Sun squares Neptune).

Thursday, the Sun trines Mars and it’s peak go-go-go. The Libra Moon squares Pluto-Jupiter-Saturn and there’s a jam up in the flow of niceties. Just do what needs to be done and the challenge to the collective mood will pass as the Moon moves to Scorpio and an opposition to Uranus. Something new is on the horizon!

Friday’s Scorpio Moon completes the opposition to Uranus and the Moon spends the rest of the day moving toward trine to Neptune. Venus picks up a building sextile to Jupiter. This could be the stirring of that seasonal comfort and joy. Lean into the feeling and jump into generosity. Soak up deep connection that boosts appreciation for what’s possible.