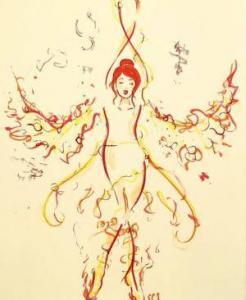 Monday morning, the Libra Moon conjoins Mercury and goes on to trine Mars and oppose Jupiter. Mercury spends the week in trine to Mars and opposite Jupiter as well. So the mood is a bonny BOOST to balancing and aligning the speed, intensity, and precision in putting our plans, our communications, our contemplations and sensations into ACTION.

With Mars in the sign of Gemini, in air, it works smoothly with Mercury in Venus-ruled Libra. Libran Mercury that can argue both sides of anything, and knows which side can WIN. It can win sweetly, politely, but make no mistake – strong and capably.

On Tuesday, the Libra Moon opposes Chiron, trines Saturn, and sextiles Venus. The mood is balanced by hard won experience, stabilized by experimentation, and topped with a cherry. That cherry (Venus) is atop a yod formed with the loose sextile of Neptune to Pluto.

Venus exactly opposes their midpoint on Thursday morning, but the effect activates Tuesday night. Ready to move heaven and earth for what you want? The groove of the Moon sweeps that Venus effect into high relief. Make some wishes, then throw your charms in on top.

With Venus coming off an opposition to Saturn, chances are this is something you’ve already worked toward. What’s a little extra effort?

Wednesday, the Moon finishes up in Libra with a square to Pluto. Pouty, it feels pouty. With stomping. But not for petulance, for frustration. For good reason. When the Moon hits Scorpio, it too becomes the point of a yod, this one activating the tight Mars-Jupiter sextile. Definite rocket fuel to the mood. Libra wants what it wants.

By Thursday morning, Venus opposes the Neptune-Pluto midpoint exactly as Mars exactly sextiles Jupiter. BUST. A. MOVE. With Leo charm. And drama. and FLAIR. Good fiery wishes and a desire that fires up a phoenix-like change… are appropriate. Create something amazing.

Thursday’s Scorpio Moon emphasizes action with a dynamic t-square, opposing Uranus and squaring Saturn. Dig in, the change is a long time coming, but quick to begin when it does. Tending that change may take some time tho.

Friday’s Scorpio Moon highlights the afterglow of that transformative mood. It trines Neptune and sextiles Pluto. It goes on to square Venus. Not everything beautiful is pretty. Art can be beautiful and still a bit ugly at times. That tends to make it special. Make your target something special.

Remember the Mercury connections… our plans are rolling. Our attitudes are taking off. And they’re creating new ideas of a type we might even call a philosophy. A new model. Friday night, the Moon moves to Jupiter-ruled Sagittarius, and the Moon heads into trine with Jupiter and opposition to Mars.

There’s SO MUCH around ideas and action! And it’s all fast, profound, and IMPACTFUL. There’s intrigue, there’s magic. There’s confusion, but the type that ends well. Mostly. Add the Moon and there’s atmosphere. Somewhere in the woods there is a wolf, but we may not meet him. Or we may. There’s always a wolf, but sometimes we WIN. A Sadge Moon goes for the WIN.