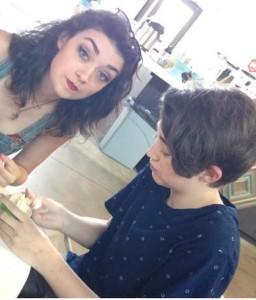 Monday morning, the Capricorn Moon moves past sign ruler Saturn into conjunction with Pluto and sextile to Neptune. It’s what passes for support these days and can actually shore up the mood a bit, even as the fog hangs and certain things sting or must go.

There’s a line in to connection, but it’s not the mundane type. Or if it is, there’s a tang to it that strokes a subtle longing for something not quite attainable. But somehow that’s okay. It’s like a box of photographs the cat peed on: Take a moment for sweet reminiscing, then toss that shit out.

Tuesday, the Moon finishes in Capricorn then moves to Aquarius. Once there, it sextiles Chiron, squares Uranus, and opposes Mercury. There’s a t-square of Moon-Uranus-Mercury with a sweet line out to Chiron. There’s some Mercury retrograde aftermath to clear up and we’re going to breeze through it quickly. There’s jangle and people aren’t likely to hold your hand while they tell you the truth. But it leads to more truth and a better outcome in the future. So go with it. Snap judgements happen, but so do bright ideas and healing words. Prepare for a twinge of anxiety, but the reality tends to be more bark – less bite.

Early Wednesday, Venus makes its exact conjunction to the Leo Sun as they both quincunx Pluto. In love and in the plot of your daily life, we have loss… but also gain. Isn’t this always true? Yes, but this is foundational and representative of something vital and a long time coming. It speaks to your innate ability to enjoy your life.

The Moon sextiles Jupiter Wednesday. Jupiter is direct in the sign it rules. Let your heart be filled and don’t even try to nail it down. Let it run and roam under the nearly-full Moon. The mood brings back more than it went out with.

Thursday, the Moon moves through the last third of Aquarius and into Pisces by night’s end. The early morning Aquarius Moon opposes the Sun and Venus, then later Juno and Mars – all in Leo. The Moon is full opposite Venus as well as the Sun. Feel through a bigger lens, a wider window, a cooler breeze. The mood is great for getting emotional perspective. It’s easier to let go of something that no longer works for you. The balance of a changing ego and drive allows a welcome, hearty chill, a respite from the heat of expectations. It’s a pro-social mood and one that facilitates a bigger picture look at the future.

In the aftermath of the full moon is a time of action and commitment.

Thursday night, Mercury closes its exact trine to Chiron. There’s one chapter with a happy ending. Or at least some good feeling growth, maybe even some closure after the truth. It could be some great news. Friday, Mercury squares Uranus, so it’s not the last of the post-retro expositions. It can also be a time when something finally makes sense or the right clue pops up. Watch your shocking mouth if that’s not the effect you want to have.

Friday’s Pisces Moon sextiles Uranus. The mood has a magic way of settling jangled tummies. Look for the opportunity to find your own silver lining. I suggest not finding it for others or you can experience that shocking mouth secondhand. By the end of the night, the Moon moves into square with Jupiter and conjunction to Neptune. Dreams rise – but so does intoxication on dreams… and other things. A sextile to Saturn provides good sense if you choose to make use of it.

The full moon takes place at 22 Aquarius. Where does this hit your chart?