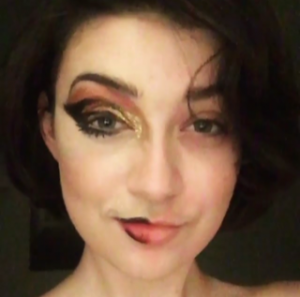 Friday night the Leo Moon forms a grand trine in fire incorporating Mercury’s trine to Chiron. All’s in for creative, dramatic fun on the run, broadcast by the Sun in Sadge as Leo’s ruler. Free wheeling exuberance is the order of the day, though there’s some part of us that’s not feeling it entirely if we’re honest with ourselves.

The Leo Moon also squares Uranus. The status quo may not deliver, a stick in the spokes of the mood.

Be honest with yourself and go with what does work. It’s a good time to amend your list of current possibilities and tune up the attitude of your reality glasses. If they’re calibrated to fit an emerging situation rather than a fixed ideal, that would be most useful.

Venus in Scorpio trines Neptune in Pisces, exact Saturday but in effect all weekend. We all want what we want. We can fool ourselves into believing otherwise, but that’s rarely the case. It’s also possible for this aspect to influence our ability to see value clearly. Up or down. We value or devalue our objects of desire, but who’s to say where the truth lies.

Under Venus-Neptune this wavy scale of value can act as an anesthetic, in either direction – up or down. Sadge Mercury’s trine to Aries Chiron puts its thumb on the scales on the side of better judgement… if you’re willing to see it. Not everything that hurts is bad. Not everything that feels good is beneficial.

This genuinely can be where the ideal benefit can flow in. But don’t be an idiot. I say this for my own good too.

Saturday the Moon in Leo trines the Sadge Sun then goes on to trine Aries Mars, another grand trine in fire. So the party embers rise to life again! With action. If you can’t or shouldn’t get out and go (likely), go places in your mind – listen, read, watch… or dance, exercise, and move. Stretch, get warm. Not everything must be literal and not all motion requires a tangible change of scenery.

The Moon also squares Venus. It’s a challenge to get what you want and what you need in the same place. To be satisfied, to feel valued… Venus trine Neptune is properly used in this case, provided there’s no harm done. Slap some of that watery goodness on and you’re good to go. At least for the night. A fantasy or a well-curated playlist goes a long way.

Venus makes an exact quincunx to Mars as well. Mars semi-sextiles (30 degrees) Neptune just before Venus trines Neptune. Illusion or an ideal benefit? It may be tough to tell, particularly if you have to decide whether or not to act on your desires. But the timing is exquisite. Effort is required, but it shouldn’t be an impossible labor. That would indicate an illusion or intangible fantasy.

Give it a shot. The proof is in the pudding, as they say.

Sunday morning the Moon finishes up in Leo with a wee hours sextile to Juno. When that shot hits the spot, satisfaction is deep and passionate.

When the Moon moves to Virgo, Mercury ruled, the fires are banked but still hot. The Virgo Moon heads into trine with Uranus and square to Mercury. Mercury quincunxes Uranus. When you go to make your attitude and understanding fit the mood, there’s a big SCREEEEECH.

We’re up to the task; it just takes some mental gymnastics. The mood is practical but also open. Don’t overrule your own objections: Look at them from another angle and see if they then mean something more workable, pleasing. Be willing to embrace what works over what used to make the most sense. Does it still? Does it really?