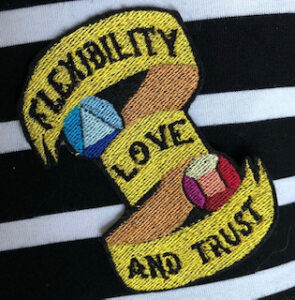 Friday night, the Capricorn Moon trines Mercury, conjoins Jupiter, and sextiles Neptune. This is to say it lights up the tight formation the other three make, in effect all weekend.

On a basic weekend, I’d be saying it was a great time to see a play, WRITE a play, drum up some enthusiasm for your creative interests – or seek inspiration in nature. Talk out your higher aspirations… remember what makes you feel joy, feel worthwhile.

This weekend I want to add that Mercury in Virgo is able to discern where service is needed. Listen and interpret with your senses. Don’t be confused by an illusion. Your service is needed. It’s strong and bright, but a bit fraught by current details and subtleties. Or not-so-subtleties.

Overnight and on into Saturday, the Moon conjoins Pluto and Saturn as well. Saturday night it squares a slowed down Mars then heads into Aquarius. The collective mood Friday and Saturday is powerful and potent. It’s volatile. If you want to be safe, do the right thing.

I saw a meme like one you’d see in pre 2020 times. It talked about the Moon conjoining the Capricorn stellium this weekend as a powerful positive. It sure is if you know how to handle it, but if you don’t – it’s nothing to mess with. These sorts of things annoy me. Don’t hand a toddler lit fireworks. They’ll jab you in the eye with a sparkler. And laugh.

There’s laughter this weekend, awesome laughter. But not all laughter is the kind you want.

Mercury trines Jupiter exactly on Saturday. That seems pretty benign. It’s enhanced, joyful sensation and communication. It’s also broadcasting and the truth. All those are great. But don’t be yelling shit at the wrong people in the wrong places. Or if you do, and you’re doing it for the greater good, be safe. Know what you’re getting into. If you choose it, awesome. Don’t be an idiot.

Be flexible in your thinking and creative with your words. If you’re trusting a deity to keep you safe, don’t act with hubris. Don’t embarrass your god. Smiting is a thing.

Sunday morning, Venus makes its exact opposition to Pluto, then Mercury closes its opposition to Neptune. Desire in Cancer is emotional. Opposite Pluto you can get a powerful response, a deeply rooted response. Take care. Consider the motives of the other. Mercury opposite Neptune can enhance or fool the senses. Are you seeing a sign from the divine or fooling yourself? Others can conceal their true intentions. Or it can be a saving grace and the right word at the right time. Confusing? That’s Neptune. Check your facts and don’t be swayed if the results don’t smell right.

However, none of that is any reason to give up on faith in the truth. Sunday’s Aquarius Moon brings an atmosphere of intellectual distance and rigor. The Moon sextiles Chiron and squares Uranus. The Mercury-ruled Virgo Sun moves into trine with Uranus. The mood brings a chance to really investigate that sniff test. How authentic are people’s actions as opposed to what they say? Experiment and trust your own mundane wisdom. You know where to research good facts. No one can wee on your head and tell you it’s raining unless you’re complicit.

Emma’s dear ones were in an auto wreck on the highway not too far from me. Their car was totaled. We’ve had a full house this week, but everyone is safe and back on their way. On the road to and from, they saw some tragic OTHER wrecks. Be safe.