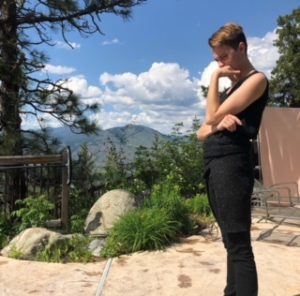 The weekend is dominated by Saturday’s midday full moon in Libra as well as Libra ruler Venus’ aspects to Mercury and Uranus. The full moon squares Pluto, kicking everything up a notch in intensity.

While the full moon action peaks on Saturday, the Sun continues into active square with Pluto, exact Monday. This is power plays on the individual level, one on one. That can be partners, collaborators, parents, anyone. But particularly partners or parents.

So where do we go to find relief? We look first to the Libra Moon. The Libra Moon holds the energy of a Venus sextile to Mercury and Uranus with that Mercury-Uranus conjunction linkage. Cherchez la femme (look for the woman, the femme, the yin factor, the receptive but powerful). This is often said as a point of blame; but in this case, it’s the savior. The savior who appears weak, but is decidedly NOT.

Think more than you DO. Listen at least as much as you speak. And BALANCE like your life depends on it. They step forward, you step back… and vice versa. Create an electric dance with your improved ability to grab an opportunity out of the air and make it real, on the fly. FLOW is the pivot point.

Be a river, and at any point you’re everywhere. Anywhere the river goes, you’re there. Be easy with it and be ready to make a snap decision.

People are intense. Be the river instead. Be the intensity of a powerful flow that honors itself and the other by being peace. Whatever peace touches becomes peace.

Friday night, the Libra Moon moves from a yod with Venus-Chiron-Mercury-Uranus toward square with Pluto. Toward, not complete. It also heads into trine with Saturn. Stay in the flow as the rapids approach. Keep your calm. It’s all in how you frame it. If you wish to be terrified, you sure can be. If you find it exciting and life changing, you’re correct. Big stakes bring big rewards.

Saturday morning, the Moon finishes its trine to Saturn and heads into the full moon opposition to the Sun and square with Pluto. Something ends. Perhaps it’s the hold that something or someone has over you, the thrall, the manipulation. Perhaps it is transformed (this power) into a form that benefits rather than harms.

If something can’t bring satisfaction and doesn’t bring you love, shouldn’t it end? What IS love? Perhaps you see that what you thought was love was something else. Your perception shifts, shocks, slips.

But still you are the river. Remember your flow, your flow satisfies. Be peace, even in the rapids.

Saturday night, the Moon moves to Pluto-ruled Scorpio and a trine to a watery Pisces Mars. The river feels DIVINE, divine to MOVE in. To row, to swim, to splash, to pray, to play. To let off some sexy steam.

On Sunday, the Scorpio Moon trines Venus and opposes Mercury and Uranus; the Venus to Mercury-Uranus sextile is tight and exact by night’s end. Though the Sun still approaches square to Pluto, the Pluto-ruled mood receives electric wisdom and a desire for exactly what is needed to succeed and root our future.

Stay in the river, move with the flow.

The full moon takes place at 26 Libra on Saturday. Where does this hit your chart? Where is Pluto transiting your chart by house? This is a time when longstanding troubles may finally create needed change.