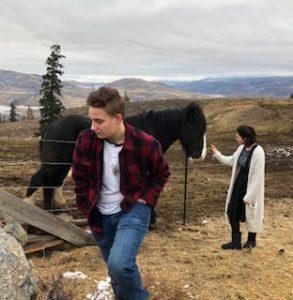 Friday eve, Saturn makes its exact, final sextile to Neptune, and the Aries Moon trines Venus. It’s an upbeat and pleasurable, fiery mood for action that illuminates the bracketing of a long period of morphing reality.

We’ve been between caterpillar and butterfly – turning and churning in chrysalis – for so very long that it’s tough to imagine being done. Moths, butterflies, dragons, fairies… who knows what’s coming out, but something is. And soon. It’s done. But each breaks out at its own pace. It’s a good time for a party. Or to run away… naked, happy, yelling, with fireworks, or something like that. Whatever works for you is nice too.

Some will know right away; some must wait for revelation. The collective is also personal here.

Into the wee hours when Friday turns to Saturday, Juno in Libra makes its exact opposition to retrograde Chiron in Aries. We speak of balance in regard to oppositions and in particular of the Aries-Libra polarity. When you’ve got something coming in opposite to your own position, it’s likely that it fills in the blank spaces in that energy or your identity.

No judgement. what’s missing does not have to contain a meaning. Being “completed” can feel like relief or it feel like an affront or an attack. It depends on what you’re identified with: what you have or what you lack.

Juno in Libra opposite Chiron in Aries describes a polarity between attachment and authenticity. Gabor Mate’ describes this as a quandry in development and maturity, as well as in connection. We must unite with our caregivers to assure our continued existence (attachment)… until we hit maturity and must come into our own, fully expressing who we are (authenticity). They stand at opposite ends of a spectrum (the spectrum being the entire zodiac, though the opposition represents a mere timeline or balance scales).

An opposition cleanly represents an all or nothing relationship that facilitates filling what’s empty and emptying what’s full.

SO, this metamorphosis completes just as we reach the crossroads of authentic identity and identifying with the other. The Saturn-Neptune change will aid each of us in making that adjustment in balance.

Saturday’s Aries Moon squares Pluto. Expect the mood to grizzle a bit – not that surprising considering all that’s transpiring. That doesn’t make it a bad time. It’s just not an easy mood. It can be a very provocative mood though, for good or ill… but all things being equal or better, it looks good.

Mars is actively sextiling Jupiter as retrograde Mercury makes its way back into sextile with Pluto (exact Saturday night). Venus on the midpoint of Mercury and Jupiter straddles the lot. Powerful realizations/communications/sensations cross over with increased action and vivacious physicality – physicality attuned to partnership (Mars in Libra). Venus in Sadge rides that free-wheeling energy for all the pleasure it’s worth.

Oh give me land, lots of land under starry skies above: Don’t fence me in! Do you see why I think it will be good for many? And if it’s not good for you, it is most certainly productive. We shall all get something, somewhere… from someone. Or we’ll feel damned good on our own.

Sunday morning, the Moon continues in Aries a bit, moving from square to Pluto and into square with Mars. Whether it’s hijinks or shenanigans is personal. The Moon also trines Jupiter: lots of emotional energy.

Eventually, the Moon hits Taurus, moving into conjunction with Uranus in the night. We catch up that strange new Taurean influence. Weird presents, alien gains and pleasures, resources. It prickles, but in a good way – whatever that is. Venus with the spurs on is enjoying the ride, but things are about to get dusty and dirty with the upcoming full moon. Enjoy the ride this weekend. It preps us to master the tides of the upcoming full moon.

The new holiday guide starts out with the next major transit after the upcoming full moon, Venus square Neptune on the 14th of November. You can benefit from this year’s holiday guide even after the holidays as it continues through the Saturn-Pluto conjunction of 2020. However, reading ahead is helpful.

SO, if you’d like to read the very specific treatise that Elsa wrote on each and all of the important transits for the season, AND my survival guide – a general breakdown of strategies by sign (for Sun sign, progressed Sun sign, ascendant, etc)… and if you’d like to make us VERY, VERY HAPPY… consider buying this year’s (much plumper) Using Astrology To Navigate The Holiday Season.