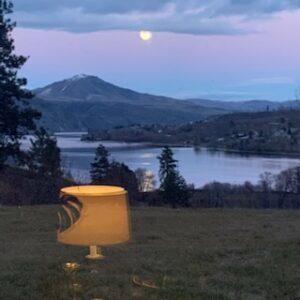 Friday night, the Pisces Moon sextiles Uranus in Taurus. Absent anything else going on, that’s a pretty nice influence. It’s got sparkle and flavor and novelty without being “too much”. Clearly your mileage will vary, but its a great night to try something new. The results can not only please but improve your overall demeanor in a way that sticks around.

Also Friday night, Mercury in Aries starts out on the midpoint of the Venus-Mars trine. It makes a late, exact sextile to Venus, then an exact sextile to Mars on Saturday. That spicy mood finds a bold accompaniment in a motormouth full of sweet nothings. This influence also confers some intelligent action and words that stand for something real and meaningful. It presents opportunity to drum up and execute beneficial plans of action.

Any concrete action winds its way through a mind first. A mind working on its own pings off the work or input of others, feeds on it. Solicit feedback or information (in person, remote, or from reference) as part of your process. It’s not that they necessarily have something you need, it’s more that the process is a tool to unhook from your own perspective enough to improve on it.

It’s like opening a window in your mind to air out your perceptions, freshen them. The Gemini Venus and Aquarius Mars breeze improves the ability to make best use of what you’ve got. It can even bring zing to something that’s lost flavor.

Saturday night, the Pisces Moon moves from a square to Venus toward conjunction with Pisces ruler Neptune. It also moves through the midpoint of the Mercury-Mars sextile. Are you getting enough physical stimulation, enough mental challenge? Weepiness is one possible mood. Don’t negate the benefits of a good cry, but don’t muck around in it either. The best use of the watery mood is to use feeling as a barometer of general direction, as muse, as inspiration. When you feel crummy or just off, you can tell the difference when you do something or consider something that improves your condition. You don’t have to be weepy or maudlin to make use of this; it’s just an obvious example.

Be open to the whole hotter/colder effect. It’s a divining rod for fate. If you’re not sure how you feel, get up and move around – change your environment. Listen.

Sunday morning, the Moon moves past Neptune and the Sun heads into Taurus. Once in Taurus, the Sun squares Saturn in Aquarius. We’re blocked – our singular drive for self hits a barrier. In Taurus, we may find the route of love, money, resources, or values is no longer clear. It’s not that they’re gone, exactly, but we may need to find a work-around to access them. With Taurus ruler Venus in Gemini in such good aspect to Mercury and Mars, this could actually be quite a fun challenge if we rise to the occasion.

In fact, Sunday’s Pisces Moon sextiles Pluto then Jupiter: a mood for a powerfully transformative adventure. The Moon closes out the day with a sextile to Capricorn Pallas Athene. Divine inspiration brings genius when you persevere.

Sun square Saturn can also mean you’re literally blocked in, held in place by restrictions. That’s pretty representative of where we are right now too. But we won’t always be there, so don’t waste time pushing back. The challenge can help you improve your game over time.

What are your weekend plans? How are you holding up?