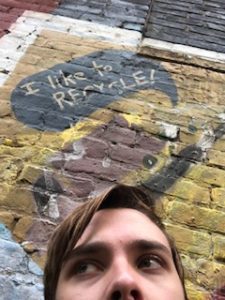 Mars began its Aquarius transit conjunct Saturn. Physically we’re not going anywhere fast, so the astrology fits. As Mars moves forward in the sign, we get traction with a change in orientation, intellectually, in theory, through experimentation and getting outside a personal, mental bubble.

Mars moves into sextile with Chiron and square to Aquarius ruler Uranus. We can go around and around, pinging back to where we started till we’ve learned enough to make something different of what we’ve got. The old usual is likely to backfire unless it’s infused with an authentic, electric twist.

The quickest way to find an opening in the invisible wall is to lead with an authentic self. Take a stab at being real. The whole world benefits when we don’t have to wade through the bullshit to brainstorm together.

Friday night, Mercury in Pisces conjoins Neptune. Signs and scents and scenes filter through the collective consciousness and the best way to catch hold is to open up wide and soak them in. There’s news. There’s inspiration. There’s sensation, and it’s yin.

Mercury also moves into sextile with Jupiter and Pluto all weekend. An opportunity arises to condense and spread powerful seeds. We can empower and resurrect, or we can weaponize and raze. Ideas have power. Words have power.

Power is neutral until directed.

Saturday morning, Venus in Gemini (Mercury ruled) trines Saturn in Aquarius. The goods are scarce, but they’re attainable with clever perseverance. There’s more than one way to get what you want – if you realize there’s more than one thing to want. If you can’t touch it, dream up a way to an intangible experience. Mercury entangled with Pluto and Jupiter is a hot blast.

This influence could result in state governments and hospitals finally getting some of those respirators they’ve been working to acquire.

Saturday night, Jupiter makes an exact conjunction to Pluto. Taken literally this can be increased death. It can also be enhanced and fortunate resurrection and rebirth. It’s a broad influence that manifests all year. This weekend it enhances our communications and senses. Access your muse! Download some of that deep magic.

Now that Mars and Venus have moved from earth to air, their continued trine favors making gains through connections with a larger world. Generate more possibilities and operate on a brand new wavelength. It’s entirely new? Good! You’re more likely to be successful. It brightens a path out of boredom or drudgery.

Friday night into Saturday, the Leo Moon lifts the spirits with access to a creative mood and a feeling of inner warmth. Friday night the Moon moves through a tight quincunx to the exact Mercury-Neptune conjunction. Be gentle with your humor. Know when to back off and when to pour it on. Sweetness, playful subtlety and generosity: play with the other if you can and dance your way into balance. Being a dorky dud is excusable, maybe even lovable. Whatever you’re feeling, you don’t have to apologize for it – but cuddle up with an attitude of humility and pride mixed. Know your worth. Know their worth too.

Saturday night, the Moon hits Virgo. It quincunxes Saturn then Mars and squares Venus. It goes on to trine Uranus and quincunx Chiron. The mood is detail and service oriented, but we want something fluffier. Once you’ve sorted out your responsibilities, try something new; use your imagination and maybe even pretend. Make sure you’ve done something productive (so you can relax), but then try something original and out of your element.

Sunday the Virgo Moon moves into opposition with Neptune and Mercury, but it spends all day getting there. Practical creativity rules and the mood is magical when you get into a groove. There may be a way to bring a fantasy down into tangible form.

What are your weekend plans? How are you faring?