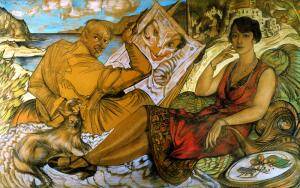 Venus will turn retrograde in Gemini at 21 degrees on May 13th, 2020.  This looks problematic to me, in places, because the planet is squaring Neptune in Pisces, which is stationing at 20 degrees.

I want to call your attention to this because I have spoke to several clients who have been swindled, recently. These are horrible situations.

I have Venus square Neptune, natally, so I know a lot about it. You want to believe that people are good. In fact, most people are. But this is not the time to place your blind faith in “the other”, especially a slick talker (Gemini).

Your risk of being tricked is high, beginning now through the end of the May.  This period peaks with Venus will at 20 degrees between May 19th-21st.

Venus will turn direct on June 25th. Yes, you may be in touch with old lovers; all the standard Venus retrograde stuff but this love and money deception is a real concern, in part because of all the other stuff going on at this time.  Specifically,

Venus turns direct at five degrees. Neptune will still be sitting at twenty degrees.  The second period of higher risk will begin mid-July and last through the first week of August.

I know this isn’t your usual Venus retrograde post but people will be tricky. Mars will be in Pisces for part of this period.  Take care because I am aware of people who have suffered staggering losses.

It’s not just you love or your money, but your faith in people that is harmed if not at least temporarily destroyed. I’m sorry for the tone of this but this is just a blog out here on the internet. I’ve been swindled and if this spares someone, it’s well worth it.

Just be sure to watch yourself and scrutinize Mercury-ruled stuff; communications and contracts. Also, don’t space out filing important papers. I know someone who did this and she is currently out 100k.  How that for disappearing (Neptune) money (Venus)?