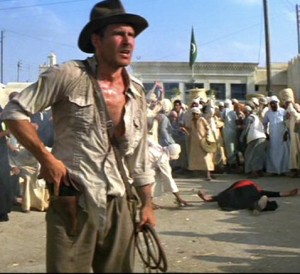 “Snakes, why did it have to be snakes?”
–Indiana Jones

My Venus quincunxes my man’s Pluto. His Venus quincunxes my Pluto. This is called a “double whammy” in astrology slang, interaspects with the same planets repeated from chart to chart. It’s not exact or within the strict orb (2 to 3 degrees) but the effect is palpable. Because we both have the interaspect in the same signs we also have it in the composite chart which registers midpoints.

Venus (what you like, aesthetically desire) aspecting Pluto (depth, taboo, pain, transformation) has a primal effect on relationships. In easy aspect you may find it brings out interest and interactions over deep subjects which transform you positively. In hard aspect it’s not uncommon to see issues arise that are just plain disturbing. Possessiveness or a fascination with the taboo are two. In either case, there’s a deep alchemy in attraction.

You’d think with a double-whammy in our charts we’d both display equal measures of the effect. It may be that he feels as I feel, but you can’t measure someone else’s feelings. I can see it in how I act. I have Mars in the 3rd and I run my mouth about it. He has Mars in the 7th and is prone to projecting or letting the other take action. In our case I find that while we might be equally affected the acting out is done by me.

We have Libra rising in the composite chart, which I have called “an attractive nuisance.” That is, we are an attractive couple, but add the difficult aspects (Venus quincunx Pluto-Mars) and we become, “oh what a pretty, shiny meat grinder…. must… stick… my… hand… in… it.” With my stronger, more outward Mars it’s always me who takes the action. It’s in mercury’s house, the 3rd, so first I say, “Why is that woman humping your leg while we’re dancing?” Then I take care it.

If someday we were to get it together enough to act in concert as a couple we would be able to use that composite Pluto Mars with Uranus conjunct (in Virgo). That might be good; I’m not sure. It would probably be like Indiana Jones when the guy comes at him whipping around a scimitar, and he just sighs and shoots him dead. I’ll have to think on whether or not that’s better.

What are your primary (hardest hitting) aspects in synastry, in relationship? Do you act as a couple, using your composite Mars, or act individually?