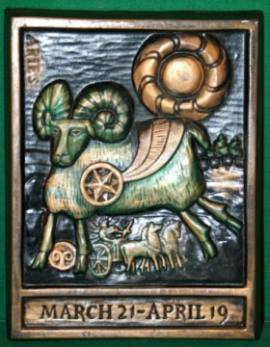 This afternoon Uranus leaves Pisces for Aries. It’s dramatic enough when such a slow-moving planet changes signs but even more so when it goes from the very last degree of the zodiac into the very first. Zero degrees Aries is termed “The Aries Point,” a powerful degree in the western Zodiac, one of new beginnings. Uranus is revolutionary; Aries is war. There’s no subtlety here, revolutionary war. Currently Aries’ ruler, Mars, is in Pisces, a decidedly peaceful sign, while Pisces ruler, Neptune, is in Uranus-ruled Aquarius, known for a cool head. Next month Mars goes into its own sign, Aries, and Neptune goes into its own sign, Pisces. Planets in their native sign are very powerful.

I’m more a follower of internal trends than collective ones, but the energies gathering are very martial. I know for myself I have a feeling of powerful energy gathering just on the edge of my consciousness. Yesterday I posted a song from my youth on Facebook, “Let’s Have a War” by Fear, a punk band from the 70’s, made popular by its inclusion in the 1984 cult movie Repo Man. Someone pointed out how very Uranus in Aries it is. Indeed. It’s also very personally Mars-relevant for me. That was the year Pluto moved into its own sign, conjuncted my Scorpio Mars, trining my Pisces Mercury. That was the year I went from listening to Amy Grant and James Taylor to discovering The Dead Kennedys, Black Flag, and punk. My energy own shifted with that of the collective.

Well, this is a huge energy shift in the collective that will no doubt be reflected in our own lives. For me this focus on Aries occurs in my 8th house, Scorpio-ruled, very intense. I’m finding the gathering energies “intense.”

Where does Aries fall in your chart? How are you experiencing this new energy? Are you feeling it yet?