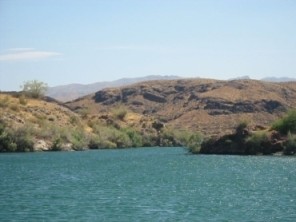 The next day we rented a little boat to putt around the lake.

I’ve never been on a boat in my life, so I hit the throttle full blast, by my nature. Let’s see what she can do, right? My boyfriend immediately turned green. He was a vomiter.

“Elsa, slow down. You’re going too fast,” he said.

“You’re going too fast,” he insisted.

“Don’t do that! You’ve got to be kidding me. What do you mean, get sick? This is the first boat I’ve ever driven!” I yelled over the roar of the engine.

“I can tell,” he said, rolling his eyes and holding his gut.

“What do you mean? I think I’m doing great. What’s the matter? This is fun! There’s nothing to this. I didn’t know I knew how to drive a boat!” I said happily.

He shook his head. “Well can you at least slow down?” He pleaded.

I turned and look at him. “Why?” I asked, staring and grinning.

“Because I think I’m gonna be sick.”

“Okay, I will. Just a second,” I said, smiling. I was cruising, and decided to write my name in the lake. I made a nice E in cursive.

“What the fuck was that?” he asked, looking incredulous.

You could see an E-shaped wake on the lake. He begged me to stop. He was Black Irish and white as a sheet.

“Elsa! You can’t write your name with a boat!” he yelled.

“Yes I can! Maybe you can’t, but I can! Watch! I’m doin’ it. Can’t you see I’m doing it? Here comes the L,” I yelled, grinning ear to ear. He started to pray and I laughed. He really looked sick.

“Okay, okay!” I said. “Just two more letters.” I wrote an S with the boat, while looking back at him over my shoulder. He was greeeeeen.

“Oh c’mon. Just let me make my A.” I reached for the camera and snapped his picture, as he groaned. “And hey! Take mine! Take a my picture of me writing my name,” I said, handing him the camera as I leaned into my a”

He laughed. “You’re fucking crazy. You’re the craziest fucking woman I’ve ever met. She’s writing her name with a boat, and now she wants her picture. I can’t believe this. It’s no wonder I’m in love you, but Jesus Christ! You’re a crazy woman. Could you please, please just slow the fuck down?”

“Yes! Yes of course! I will, just as soon as I’m done with my name. Uh…just let me finish this A…”

Knowing it was my last letter, I turned the boat as tight as I could. “Is this great or what?” I said, smiling wide. “Hang onnnnnnnnnnn!”

Looking over at him, I laughed. “Oh no! Yuck! Sorry about that, man. Did you get my picture?”

So there you go. Now I loved the living shit out of this guy, but this problem ultimately did us in. See, I was 19 and I was 20 and I wa 21 and I was trying to become. To become the person I was meant to be, that is which is someone who is at least a little flamboyant.

But I could not do this with him around. I just couldn’t. Every time I tried to shine, it was the same thing. “Who do you think you are? What were you thinking when you did that/said that/were that? Why can’t you just… I love you but…”

And eventually we split. And it was inevitable, in spite of the fact, I loved him with all my heart. It was either that, or let him reduce, restrict, control me…etc. And not that there isn’t a positive way this could have played because get this:

My current man also has Saturn (in Scorpio) widely square my Venus (in Leo). I never feel restricted by him, he’s got too much Aquarius. However he’s taken ten pounds off me.

See, Venus is hedonist, and very, very vain. So his Saturn comes in and says, “If you wore, blah, blah, blah, it would show off your waist…” Or I say, “I have been working on my inner and outer thighs,” and he says, “Well, you will be rewarded for that with my horniness..”

See the difference? It’s Saturn energy in both situations, but the first guy was operating out of fear. He was trying to control me to assuage his insecurities.

My current man supports (Saturn) my desire to be attractive (Venus) and this makes all the difference, doesn’t it?