Saturn/Neptune/Uranus/Chiron T-square of ’52-53 is being activated.

Beginning in 1952 and lasting through 1953, Saturn and Neptune formed a conjunction. In 1952, Chiron and Uranus formed an opposition to each other, and joined in a t-square to the Saturn/Neptune conjunction. Think about that. If you take it apart and look at each planet individually, are they friends with each other? I think Saturn and Chiron might be able to get along in the best of circumstances, if Chiron is able to heal through the earthiness and reality imposed by Saturn. But Neptune, Uranus and Saturn… they have diametrically different ways of expressing themselves. While a case can be made for Uranus and Saturn getting along sometimes, because Saturn is the ancient ruler of Uranus, meaning (to me) that if you’re going to be an iconoclast, those in a position of power stand the best chance of destroying old form. Otherwise, they rub up each other irritatingly, with Uranus wanting to smash Saturn’s old forms, and Saturn protesting that tradition holds value.

Neptune and Saturn stand toe to toe and look at each other: Saturn says “Pull yourself together, man! Get a plan and work towards it” Neptune says “RELLLLLLAX, the Universe will provide!!!” I see this t-square as powerful energy around the family dynamic; how to have a relationship totally unlike your parents’ relationship… the Uranus/Chiron aspect in Cancer/Capricorn has seen what the “traditional” relationship has yielded, and is decidedly not happy with it. The desire is to have a new paradigm of relationship (Saturn/Neptune in Libra), where one can fully express and manifest their own unique creativity. There is a baby/bathwater question that is integral to the signature of this t-square.

So those born between 1952 and 1953 have this mash-up as part of their internal make-up. These 4 planets, squared off against each other, and each needs to have their voice heard.

For you ’52-’53ers, the current Uranus/Jupiter opposition is calling your name. You are undergoing a time where your individual accommodation of this t-square is up for review. Transiting Jupiter is on your Saturn/Neptune conjunction. Jupiter conjunct Neptune is the dreams-come-true transit, but with Saturn there, hard work, dedication, discipline is involved. Transiting Uranus opposing those 3, sudden opportunities may pop up, and you’ll have to discern (Saturn) whether or not they’re too good to be true. If so, Uranus can take away things just as quickly as it brings them. It’s an unpredictable time for you, as you try to filter out what’s possible and what’s just plain pipe dream. If you find yourself too far in the realm of fantasy, find yourself a Saturn-type person, someone you can run your ideas through who can show you where you need to fine-tune, or just give you an old-fashioned reality check. Jupiter/Uranus/Neptune may not want to have someone punching holes in their fantasies, but it’s absolutely necessary right now. Under this current planetary configuration of transiting Jupiter sitting on your Saturn/Neptune, and Uranus opposing it, there is an inevitable 2×4 to the head when you slide to far into Neptune’s realm; Saturn and Chiron see to that, and Uranus delivers up the sudden event that makes you see the error of your ways.

After a lifetime of perfecting the art of finding balance between structure and formlessless; of being able to discern (Saturn) when your dreams (Neptune) can become reality, and when it’s just plain folly, Jupiter and Uranus have arrived to free you from any remaining vestiges of self-imposed exile, in whatever form Saturn/Neptune means to you. What house does that conjunction reside in your chart? That will give you a concrete idea of where you have had the struggle of doubt and uncertainty. Remember, too that Neptune rules free-floating anxiety, and with Saturn conjunct, it can make your anxieties feel very real, if Saturn is too over-emphasized. 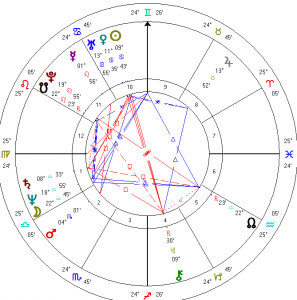 Keep in mind that Pluto is coming up to your natal Chiron, which is when the bare-boned reality of whatever it is you’re attempting to manifest at this time will arrive.

This is the chart below of Dan Aykroyd. I couldn’t find a birth time for him, so I used Noon. He’s got the waxing conjunction of Saturn to Neptune, with the Sun and Venus involved in the t-square of Uranus/Chiron/Saturn/Neptune. Being an actor, he certainly was able to use Saturn in a positive way… did you know that he was the one that dreamed up “Ghostbusters”, which eventually turned into an entire media franchise, due his fascination with parapsychology? Such is the power of a T-square. If he was born between Midnight and 4 a.m., the Moon was sandwiched in between Saturn and Neptune, which is perfectly captured by his famous phrase on SNL: “Jane, you ignorant slut!” Without Saturn involved with Neptune, he might have ended up like his best friend, John Belushi, who had Neptune aplenty, but no strong Saturn signature in his chart. When it comes to Neptune, you can’t go wrong having some Saturn. The problem only presents itself if you over-identify with Neptune, and receive that 2×4 I spoke about earlier. In that case, Neptunian disillusionment, served up alongside Saturn, can be soul-crushing. 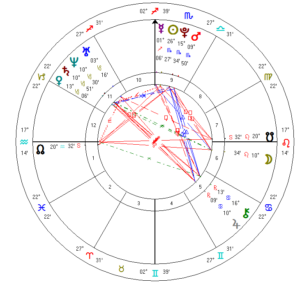 Very little is said about Akyroyd’s marriage, only that he married in 1983 to actress Donna Dixon, and that they have 3 children. Those with Saturn/Venus and Saturn/Sun squares, take heart!! Time isn’t going to permit me to go into this next chart very deeply, but upon seeing it, you’ll know why I am including it. It’s of his first-born, Danielle. Some signatures in charts are passed down, generation after generation. I am betting Danielle has inherited her father’s deep love of parapsychology, which Dan inherited from his own father. I think it’s likely she identifies deeply with her father (stellium in Capricorn), and has her share of issues with her mother (Moon is stressfully aspected).