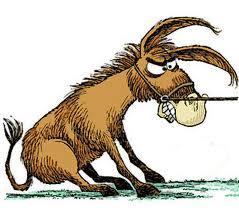 I’ve always had my shorts in a bunch, emotionally. I have a Scorpio moon, squared by Uranus. I have spent a lot, a REAL LOT of time contemplating Uranus squares. My daughter has one, as well—Sun square Uranus. My son, he has Uranus as the final dispositor of his chart! All of us are stubborn, beyond belief. Stuck on stupid, in some ways. Not in all ways, mind you- both my kids are absolute geniuses in some ways, they are quirky and highly intelligent. Myself, I’ve always been called things like “clever”, or “sharp”. No one ever accused me of being a genius….but my Uranus side comes out through my love of Astrology. That Moon (in the 7th house) makes me able to “get people” in a way that is unique (Uranus). Communication comes through in very quirky ways, not through normal everyday conversation—almost like electrical signals, instead.

But, back to the donkey… Uranus squares to personal planets can mean that the very thing that we would like that personal planet to have, in order to be happy, we sabotage through the square to Uranus! Some astrologers say that Uranus rules trauma, the kind of trauma that is cellular, that you bring in from past lives and thus are unable to directly access. So you recreate the trauma in your life in strange and unfathomable ways. Because a lot of us have a Uranus/Chiron opposition in our chart, this means that the personal planet, like my Moon, is the focal planet of a t-square. This can complicate things a little more, because now you’ve got the Chiron wound thrown into the mix!

So as I’ve aged, I’ve learned that my go-to reaction when my Moon is threatened is absolutely the LAST thing I should do. I was the connoisseur of the “pre-emptive strike”- Scorpio moons are known for hiding their emotions and cutting people off, and when threatened, I would pre-emptively end a relationship out of fear of the imminent demise of the relationship. My partner might be just trying to start a conversation, and I’m OUTTA THERE! Sitting still, not ditching-and-running and allowing the fear to wash over me has gotten easier in time, but I’m in my 50’s!

When I consult with people over their Uranus squares, I try to tease out how they self-sabotage. At the base of that sabotage is a truly well-hidden message we tell ourselves so that we are repeating our trauma in this lifetime, having brought it over from before. Now, again—- Uranus is stubborn. It’s not an easy find, this trauma. And then once you recognize it, it’s imperative that you find a way to derail the knee-jerk behavior that repeats the trauma, because believe me, this is one stubborn behavior; one that you most likely have identified as “unique” and something that you think marks you as an individual.

I used to have a real cute nickname for my one-foot-out-the door syndrome, like it was something to be proud of! But then days or months later I was saying to myself “what the heck did you DO????”

That’s the thing about those Uranus squares, you shoot first and ask questions later, stubbornly sure that your reaction was NOT, uh…. a little “hasty”. So, in essence, you shoot yourself in the foot.

And if you love someone with a Uranus square, and they tend to be a little like Yosemite Sam, you can help them (and yourself!) enormously by taking a step back when the guns come out, hold up your hands and say “whoa, cowboy… I am just trying to have a conversation here….”

A sense of humor in the face of a Uranian “attack” is an incredibly helpful way to diffuse the situation, because the situation is most likely a result of something buried deep, deep inside the person who’s sitting on a mule, holding the sixgun.

Do you have a gunbelt strapped on? Or do you know a Yosemite Sam?