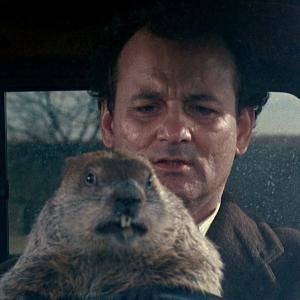 I remember the first time Elsa said to me, “People’s planets hitting your chart act like transits.” There’s something so perfectly simple about that and yet in years of thinking on it I’ve yet to finish ruminating on that statement. For me it’s an inexhaustible source of inspiration. What does that really mean? How does that work; WHY does it work? I really appreciate these little mind puzzles, not as pointless as sudoku and I can tell myself that it’s more important than cleaning the house.

Do you know the movie “Groundhog Day”? The main character is forced to relive the same day, over and over again. He goes through an amazing transformation in the process, from selfish gassbag to the ideal zen-lover. Well, someone’s effect on us, their chart’s effect on our chart, is a similar thing. We’re reliving the same day (their birthday!) over and over again when we’re interacting with them. They are reliving the same day with us, our birthday. Over time as our planets bump, they either grind the rough corners off each other (growth!) or they grind us up.

Sometimes people don’t fit and we move on. Have you ever wondered if that person goes on to have the same problems with someone else? What about the guy who wouldn’t commit but marries the next woman he meets? On one hand, people are the same people they were when they were with you. A jerk is still a jerk and you were right to move on. People will be who they are in and out of relationship. Sometimes people change how they express certain energies given certain transits, particularly the harder, outer planet transits. Sometimes they change how they express their energies because of the effect of one person’s planets on another. Sometimes those changes happen in the relationship and sometimes they happen, just like with transits, after that relationship passes. Sometimes the effect of the past relationship really only takes shape once that influence has passed. Would he have committed to you if you had just hung in there? Maybe, maybe not. I’d tend to say probably not, not if you really gave it a shot when you were in the relationship, if you gave it your all.

There are three sets of energies in the relationship, mine, yours, ours. Each “ours” energy is singular and will never be played out with another person, so some issues are only relevant to the relationship. We take our energy and combine it with another person’s in each new relationship. If you’re getting the same problems over and over, the problem is either so strong in you that you’re overpowering the other person’s energy (hello, that’s not healthy) or you’re choosing someone similar to replicate the same problem with again. That’s your choice, but be aware it is a choice even it’s subconscious.

I think sometimes we may want to believe one of two things, either that people will never change and they’ll be exactly the same (jerk) with the next person, or that we made some kind of mistake and should have done something differently. There’s a little truth in each of those, but the bigger truth is this: it’s a process and you have to follow the path where there’s growth. You want enough challenge in the relationship to make each other shine, but not so much that you bleed! You do your best and you try not to bitch about it, unless that’s, you know, what makes you happy.

Did you ever feel like being in a relationship changed you? Was if for the better?