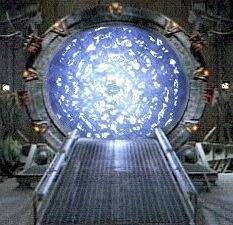 The vertex in the astrological chart is a theoretical point, calculated mathematically, like the ascendant or the midheaven. I’ve seen it referred to as a secondary descendent. I would consider it like a fated descendent, a point where fated encounters are drawn to us, where they enter our lives.

Dr. Z calls the vertex Destiny’s Gate. I think of the vertex, brace yourself for the geeky reference, like the Stargate of Fate. The Vertex Stargate is activated and a fated experience or person steps through. Sometimes in synastry you’ll see a double whammy effect with each person having a personal planet conjunct the other’s vertex. In that case it’s like a vortex opening between the two individuals, with each having a fated influence on the other.

Vertex activation by transit or synastry heralds the entrance of a person or event that is karmically pointed. Something or someone enters our lives in order to steer us in the direction of our own greater good, something to keep us on task or put us back on track if we’re straying. This can be a positive epiphany, a stressful can of worms, or anything in between.

One often sees vertex activation at critical points where you can look back and see a powerful intervention or redirect. This could be the meeting of a soulmate, or a mentor. It could be a job offer or a proposal. It could even be something so simple it could be overlooked. One time I gassed up my car for a long trip and headed out to go over a very dangerous mountain pass in winter. I always, always close my gas tank door after I pull out the fuel nozzle. As I was heading up the pass I saw in my rear-view mirror that it was flipped wipe open, so I pulled over and shut it. I remember thinking to myself, that is not possible; I distinctly remember closing it securely. I got back on the road and within ten or fifteen minutes encountered a huge, multi-car pileup at the end of a blind curve. The moon at that time was exact on my vertex. On one hand it was very pointed, on another it would be easy to overlook.

Where is your vertex? Have you ever noticed events or people entering your life when this point is conjuncted by a transiting planet?