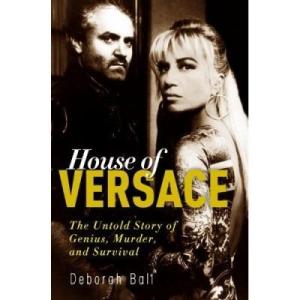 “It is not a murder book, at least not yet,” I told my husband on the phone. “It’s about Italy after the war at the moment and it’s engaging. This is a very good book, well written and interesting.” (House of Versace

“Okay, so they were poor. The Versace family. Everyone was, after the war.  They had very little, they were peasants but the mother was talented. She was a seamstress. All the fashion came out of Paris at the time but she’d buy the couture patterns, the high end stuff from Paris and she’d make the clothes but she’d add some flair. She’d put an Italian spin on the clothes, I guess you could say. Sex them up a bit.”

“See, now this is interesting. Back then the women did not want to look younger than they were. They were after something else so in a sense the Versace family started this movement where people want to look young and sexy. The initiated the trend. Prior to their innovation, the rich women wanted to look rich, not sexy. It was a more reserved, elegant look, you get the idea.

“So anyway, Santo is the older brother and he does all the traditional stuff that is expected from the oldest son. He is a great son, for the era. He’s just a solid person and he actually manages to graduate from college which was spectacular at the time because no one would afford college. But the mother was talented and the son, hard-working so they pulled this off.”

“Gianni did not fare well in school. Not cut out for it but charming and well… well, he was born to be a designer and this was apparent right away. He was always with the women, sewing. He was obviously very talented and overt in his personality. He’s candid. He said he had 20 women in love with him and 30 mothers when he grew up,” I said with a chuckle. “He was great with the women and then there was, Donatella, his sister.”

“She was, 9 years younger than, Gianni. Quite a bit younger so she was spoiled.  This was not her fault, it was just the way it worked out. By the time she was born, the family was doing well. They had worked their way out of poverty and had come comforts.  They were living pretty well and it was a happy time in general. The whole population was happy. They’d survived the devastation of the war and they were coming up now, rebuilding, so people felt jubilant.  And then here comes this new baby and what the hell.  They spoiled her because they could.”

“This was even more the case because there was actually a sister who died. Yep, there was a sister about the same age as the boys but she died so they had this new baby, and by then they had resources so you can imagine what happened. They were older and they all took care of her and loved it.”

“Okay, so when Gianni is killed, I think this is fascinating. He’s wildly successful by then, he is renowned around the world of course, and Donatella takes care of some of his business… a lot of his business.  In fact she is in Italy doing one of his shows when he is killed but get this: Donatella is very extravagant. She gets herself everything all the time. She arrives in a city and books the entire top floor of the best hotel for just herself, but her brother, Santo, the studious one?”

“Well he hates that. He just can’t see spending money like that it so he stays somewhere else, somewhere modest and low key. That is what I would do too. He was from poverty so he’s got this other mindset. Well, some people do go from poor to rich just fine but others never feel right spending money on something that would be considered wasteful.”

“Yeah, they just don’t want to do it. But in any case, I just think this is a good story and illustrates a lot of things. You can’t expect Donatella to have the mentality of her older brother. She is from another generation, essentially. And it’s only like, ten years difference or so which is telling. Ten years and the conditions have changed so radically the people who are born into them have very different mindsets.”

“Well, considering this, it’s no wonder people who are 10 or 20 or however many years younger than us have no idea what we are talking about. They’ve never experienced poverty, loss of freedom or anything like that so they don’t know anything about it.  It’s not real to them even if they happen to read about which they may also avoid.”

“They may but before they do, it’s not reasonable to expect they have our attitudes or any understanding of what we say. We seem behind the times and maybe they learn the hard way? If you have always had freedom, then that’s what you know and expect. If you have always had enough, you are not going to have internalized things that, Santo understands. You will be like, Donatella, who expects there will always be enough. In whatever case, I am not reading a murder book. This is a book about an interesting family that I can relate to. Also, it’s written by someone who can tell a story so I am quite fortunate to have found it.  Everyone in the family is extremely likable and this also makes the book super enjoyable.”

How does your tastes and values differ from your parents / people older or younger than you?