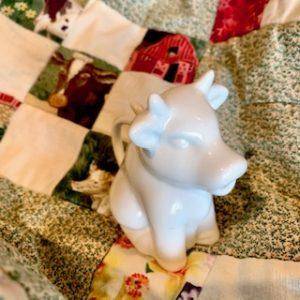 The full moon doesn’t reach the exact degree of opposition to the Scorpio Sun till tomorrow morning. However, things often pop in the hours leading up to a transit. The quicker moving the actors, the less time you’ve got in the lead-up. So I’d be looking at today and tonight for effect.

Vesta is currently retrograde and will be tightly conjunct the full moon. If you’re interested in a breakdown of Vesta’s energies, try Introduction To Vesta. In the end, Vesta symbolizes deep devotion. In Taurus, and here comes a dad joke: It’s a sacred cow.

It’s an indicator of devout attention in a fixed sign, ruled by Venus. So the collective Vesta energy centers itself on values, what we consider ours, our valued attributes, and commerce. Dolla dolla bill, y’all – not only that, but that too. It can be how we value our possessions, our looks, and with Vesta – whatever we hold dear.

Look to the house that this full moon will inhabit (just under 20 degrees Taurus) and that is where Vesta is also transiting your chart. Vesta in that house will be bringing focus to devotions in that area of your life. The full moon will likely involve those sacred cows. It behooves* us to investigate those subjects in our individual development. It’s likely to be something dear that is up for renewal or reversal.

It’s time to double down or move on… about something you value. It is likely time to look at your devout devotions and decide if that’s the hill you want to die on. Perhaps it’s time to let that go and put your energy elsewhere. It may be that particular value has served its purpose and is no longer needed. We can let some things pass in order to move on to something fresh and full of new pleasures.

Where does the full moon conjunct Vesta hit your chart? Do you have a sacred cow coming up for review? Have you considered it?

MANY areas in our lives are up for review and on the verge of great change over the course of the next few months. Many additional areas are covered in the new holiday guide, as well as my own 12 sign breakout with tips for a better holiday (and after) experience. Also, it’s a great way to support what we do here at the EE site. If you’re interested: Using Astrology To Navigate The Holiday Season.

*Unintentional dad joke about sacred cows… hooves, get it? I may have low blood sugar. I’m not even a dad, or a man. I bought the variety pack of Cap’n Crunch – it’s probably that. Also, the roof of my mouth hurts.