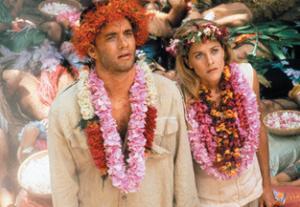 Tom Hanks is a talented and affable actor. I’ve been looking at the astrology of popularity lately and thought, “Who doesn’t like Tom Hanks?” Well, there are probably eleven people out there who don’t, but exceptions prove the rule. He’s a handsome man, pleasant looking with Virgo rising and Venus aspecting the ascendent, but not devastatingly so as to attract resentment.

With Mars in Pisces (a great acting placement, able to morph into character at will) conjunct the descendent aspecting Gemini Venus on the midheaven he has a double whammy Mars-Venus contact. Gemini and Pisces placements enhance these traits with their ability to change and meld.

Leo moon and Cancer sun add to his appeal. Leo is drama and good-hearted humor, what better? His Cancer sun is homey, not homely but comfortable, comforting, and his Mercury shares the sign placement. His 11th house Leo Moon conjunct Uranus expresses a need to perform and innovate. An actor doesn’t have a successful career spanning decades without the ability to move with the times.

How do you feel about Tom Hanks as an actor, as a generally well-known personality? What’s your favorite Tom Hanks movie?