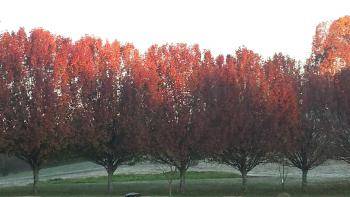 Yesterday, I mentioned I was going to a funeral – How Are You Faring Under The Stellium In Pisces. The service was beautiful. I’d even say it was inspiring.

The gal who died was ninety years old. She was the last of her siblings to pass and the matriarch of a large family. She died surrounded by her family; all of her children, their children, and some great grandchildren as well.

The man who gave the eulogy had known her for decades. He talked of the love she gave her family and explained that when she began to fail, they turned around and gave that love right back to her. They would not have had it be any other way.

He also talked about “legacy”. He said she was the kind of person, when something needed to be done, she did it. She didn’t talk about it, she certainly didn’t whine about it, she just did it. Every single one of her descendants behaves this way. I know, because these are my neighbors.

There is a line of trees of about twenty trees that separate our house from one of he house of one of her sons. I woke up one day and he was pruning them.  This is a lot of work a man in his 60’s, but it needed to be done, so he was doing it. They aren’t his trees. They’re our trees and they needed pruned so he was doing it. He would not have asked us to help or to pay or any other thing, in a million years.

Then there was the time we got our truck stuck, backed into the mud. Our neighbors heard the engine racing, showed up with a truck and a chain to pull us out.

I’ve the mower into a compromising position more than once. One of them always rescues me but the most amazing thing…

Once, an ambulance turned into the house next to us.  Various family saw that and called around because they knew no one was home.  They were checking on each other, see?

Well there was nothing wrong but one of them thought of me. They knew I was home alone. We live in the country.

“What if they’re looking for, Elsa?” one of them told his sister. He was at work.  “What if they went to our house mistake? I don’t know if she’s okay. You go over there and check…”

Next thing you know, this gal is inside my garage, banging on the door to the house. I had the garage door open.  Just as I got to the door to see what was up, she burst through it.  “Are you okay?” she asked.

Her adrenaline was palpable. I immediately knew it was something like what it turned out to be. “Yes, I’m good.” What’s up?”

She explained the situation. She was slightly embarrassed but I told her right then how much I appreciated her checking on me and also, her cousin for insisting.

Yesterday, at the funeral, she apologized again.  “You probably don’t recognize me. I’m the one who came bursting into your house.”

“Are you kidding me?” I said. “I really appreciate what you did.”

What she did, is risk being shot to make sure her neighbor, who she didn’t know, didn’t need help.  Because someone needed to do it, see?

I’m really getting tired of reading the news.  You read this crap and get to thinking that’s how people are. They’re horrible, worthless, hopeless, frightened. But this is not how people are.  And it still pays to set an example.

pictured – those are our trees in common. One of this woman’s sons trims them so we easily mow under them.