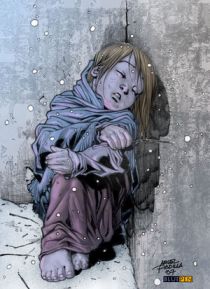 “There is no way I will ever be in that club,” the soldier said regarding the club my ex-boyfriends have and they do have one. “I don’t care what happens between me and you, I will not join that club.”

“I may go to one meeting,” he said, shocking me.

“Just one,” he said. “I will just go that one meeting just so I can kick everyone’s ass that I have threatened to kick. I’ll say hi, I’m the soldier. Hi solider. Ive met Elsa when she was 17. Known her longer than anyone here except for Scott, I guess. Hi Scott, everyone will say.”

“Oh brother,” I said rolling my eyes. “Now why would you do that? Why do you want to hang out with my ex-boyfriends and husbands who hang out with each other until the end of time for reasons I’d rather not speculate?”

“I am not going to hang out with them. I said I would go to just the first meeting and that’s it.”

“I don’t know, P. I’d figure I got nothing out of this, may as well get an ass-kicking out of it.”

Later he told me he thought I was The Little Match Girl. As always I didn’t know the story and I think all this can be chocked up to Neptune and perhaps the 8th house. It’s as if I am an entity I don’t even understand.

Do other people’s perceptions of you more or less match your own?

Illustration by Ariel Padilla of Bluepen