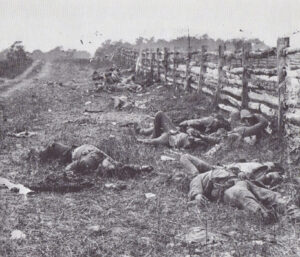 My husband and I recently watched Death And The Civil War. It was not easy or enjoyable to watch but it was inordinately interesting on a number of levels, in part because of it’s narrow focus.

The viewer essentially watches 620,000 people die in the course of an hour.   There is no way you can watch this and not be impacted. There are a number of points made and theories raised, that really get you to think.

At the beginning of the program it’s mentioned that at the start of the civil war, virtually all Americans believed the same thing (about death). This was a Christian country at that time. The consensus was that you met up with your loved ones in the afterlife.  It would have been hard to find someone who thought anything otherwise.

I was struck by this. I’ve not lived in a time or a place where people held beliefs in common. This is contrast to my husband who grew up in Latin America for half his youth, where essentially everyone is Catholic.

I value diversity.  But with all the division in our culture at this time, and with all the strife and resentment that exists because of it, I can see a real upside to the idea that a community live with a set of rules they agree on.  So this hit me between the eyes.

Thomas Lynch, author of “The Undertaking”, who I mentioned in this post – The Death Business, is featured on this program. He’s always interesting.  At some point he said he felt that the civil war was the beginning of the death of belief in America.  His statement stunned me.

With Pluto transiting my natal Mercury, I am becoming more and more aware of the depth of things.  What if he’s right?

I sat on this for a couple days and then looked at charts in the mid 1860’s. Jupiter was in Scorpio (lots of death, and yes, death of beliefs).  Pluto was in Taurus so death was REAL and earthy.

I haven’t drawn any conclusions about any of this. I just want to tip you to this program if you’re interested in such things. The show is streaming on Amazon, free if you have prime.  I by no means covered what is covered in this deeply affecting documentary.

pictured – The dead of Antietam, photo by Alexander Gardner