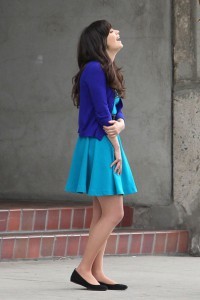 I find Zooey Deschanel just delish, and I would as she’s a double Capricorn with Sun and Moon in the sign, approaching the new moon. Ruler Saturn trines the Sun. She shines with staying power. Capricorn also rises with Mercury conjunct. For all her sweet, good looks and charming exterior, she’s a stout character! I’d expect she’s a solid communicator with a great deal of emotional intelligence as well, and with all of this rising, that should be apparent.

But what got me interested in her chart was something else entirely. I was shocked to hear that she has quite a few vocal detractors! What? She’s gorgeous, witty (Mercury rising in Capricorn with Jupiter Mars in Virgo), fresh and accessible! That immediately makes me want to check out what might be driving what I see as a disconnect. And boy is there a lot of that as well.

When people evoke strong reactions in others, the first thing I expect to see is Scorpio rising or Pluto conjunct the ascendant. She has neither. However, she has Pluto squaring the ascendant from the 9th house: She broadcasts that Pluto effect in a way that impacts her public appearance. Pluto squares her Saturn-ruled Moon giving her emotional depth in challenging proportion.

Uranus sextiles the ascendant adding elfin appeal to her classic good looks. It also energizes her physical appearance and gives the impression of great vim and vigor! She’s snappy! Her Virgo Mars conjuncts Jupiter and she emits a fresh, upbeat energy, jolly and philosophical. In the 8th house the Pluto effect reemerges with a tinge of the taboo about it, another reason people might instantly balk. She’s deep. And with all the Capricorn, she’s impressive and solid, here to stay. That can be intimidating. She’s the whole package and the real deal.

With Venus in Pisces in the second house, not only is her aesthetic sweet and dreamy, this reflects her values, and again, she’s the real deal. With Virgo Mars-Jupiter in the opposite sign of her Venus, she undoubtedly has the skills to balance that sweetness with frank and forthright action in service. Black Moon Lilith opposes her Venus from the 8th house, and here is where I think the crux of the issue really lies. She’s a strong, powerful woman with the aesthetic of a sweet, elfin princess. She has to be one or the other, right? She’s got to be hiding some sort of nastiness in all that pretty. Well, no, she doesn’t. They can coexist quite nicely together, ideal, wild, primal feminine strength with the pretty. I think she does a great job of owning both.

Deschanel is a musician and dancer as well as an actor. Her group She and Him, with M. Ward, is very successful and has a snappy, retro-ish sound with a wide appeal, hipsters to housewives. Her Neptune-ruled Venus has a great deal of impact on her talent and her music, and it conjuncts the south node while squaring Uranus. This brings a wealth of innovative energy and a confidence that bespeaks a deep experience of this Venus energy over lifetimes.

Her 12th house Moon is very near the ascendant, but still hidden by house. It’s in Capricorn, which is a tough moon to have. People with a Capricorn Moon have the built in challenge of feeling good enough anyway, even without a 12th house position which can result in emotional martyring. I’m not talking just feeling sorry for yourself, I’m saying people will scapegoat a 12th house moon. But with all that Capricorn she certainly seems (acsendant) to hold up well! With all her Capricorn she’s likely learned to put on an impenetrable face, lovely as it is, and hold the line as she works toward the goal.

What is YOUR impression of Zooey Deschanel?