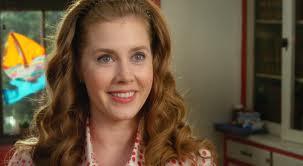 “I like Cinderella, I really do. She has a good work ethic. I appreciate a good, hard-working gal. And she likes shoes. The fairy tale is all about the shoe at the end, and I’m a big shoe girl.”
–Amy Adams

Screenwriter and playwright John Patrick Stanley said of actress Amy Adams, “She’s got this Ingrid Bergman thing going on, this luminosity. You see a good person struggling in this complicated world. She’s fiercely intelligent but has this peculiar innocence about her. She has a beautiful face of light.” Amy Adams has Uranus sextile her Leo Sun, an electric shine that accents her humanity. Leo is the sign of both actors and royalty. I was never more struck by her perfection in a part than I was by her portrayal of the role of Giselle in the story of a cartoon princess come to life in the movie “Enchanted.” Perhaps this is because her chart is such a perfect example of the archetype of the fairytale princess.

Echoing the drama and royalty of her Sun (ego), Amy has Venus in Leo, fiery beauty and a shiny aesthetic. Venus trines Neptune for a magical appeal and the ability to transform her look. What fairytale princess is not opposed by a dark queen? Amy has Black Moon Lilith opposing her Venus. Pluto figures into her Venus-Neptune-Lilith configuration, trining her Lilith and sextiling both her Venus and Neptune. Power and transformation come into play in the opposition of the dark queen and the beautiful princess. Pluto is in Libra. Good and evil anyone? I can just see the lovely, poisoned apple.

Chiron in Aries opposes Uranus in Libra, self versus other, the primary wound versus moving beyond it. Her Sun trines Chiron and sextiles Uranus. In acting she has the ability to access her pain and make into into something that will take her into the future.

Amy Adams has Mars in Virgo, earthy and quick. With her Mars sextile Saturn she has reserve and reserves. She has the ability to modulate her energy. Jupiter is conjunct Juno in Pisces. Her commitments are buoyed by their proximity to Jupiter’s fortunate placement in Pisces. Jupiter and Juno oppose Mars in Virgo. This resonates with me as being illustrative of the recurring fairytale theme of the common maiden (Virgo) who is hidden (Pisces) then found or elevated (Jupiter) to her true status through her deeds (Mars) or the deeds of others (opposition to Mars or the very Piscean theme of rescue/damsel in distress).

I began looking into Ms. Adams’ chart because I wanted to know why she always looked to me as though she were ready to burst into tears. I ran this past my daughter and she said she didn’t see that at all. However, Amy’s Jupiter-Mars opposition hits my Pisces Sun-Mercury to Pluto opposition. Perhaps that’s the reason, maybe it’s just something unique to what I see. However, Jupiter/Pisces and Mars could definitely be a burst (Jupiter and Mars) into tears (Pisces) kind of thing. It’s sometimes interesting to see how the energies of those we don’t even know can have an impact on our own placements, affecting how we view them.

Amy Adams is my idea of an archetypal fairytale princess, who’s yours?