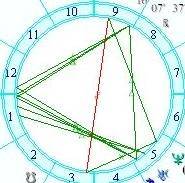 I’ll tell you how this second composite chart works out in the world in real life. For one thing when I first met, The AMF he was seeing a therapist. He attached to me  very quickly which upset her. I think she had a little crush on him because she had no problem with him meeting women he didn’t like. 😉

But boy oh boy when he showed up happy she lost it. Apparently, she got all agitated. She started tapping on her clipboard, clucking, admonishing him and so forth. He’d never seen her lose her composure before so this was telling. But it was also beside the point because guess what happened?

Nothing. He quit therapy! He never saw her again which was no great surprise. Because look at that chart! If two people meet and the composite looks like that…well I can’t imagine anything is going to stop the relationship from forming which is exactly what she was trying to do.

So when The AMF and I met, the relationship just constellated. We met in the park on a blind date. Being Scorpio, he arrived early to position himself so he could monitor me as I arrived. Knowing he was a Scorpio I arrived even earlier to stalk the stalker.

I was standing there at the edge of the park scanning, when I saw the brake lights flash on a car parked across on the street and down a ways. I knew it was him.  When he got out of the car and I saw him, I really knew so I started waving, all friendly like.

Later he told me, “I should have got right back in my car and drove away. Because you were standing there waving, like “Here I am, motherfucker. What took you so long? Come and get it, dumbass! I’m her, you stupid Mexican!!!”

But he didn’t get back in the car. He walked right into it and we’ve been there ever since. (edit to add – 3 years at the time of this writing)

Well, you remember the Mars square Mars in the other relationship? In this relationship the Mars are conjunct. For newbies, that means they are TOGETHER. They are on top each other rather than opposed. Isn’t that funny?  We can move a couch!

Have you ever had a friend meet someone and just be… gone? 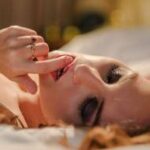 Do You Like Sex? You Must Be A Scorpio!